1.e4 Nc6? What's the idea? How should you react as White? Find out in this article! 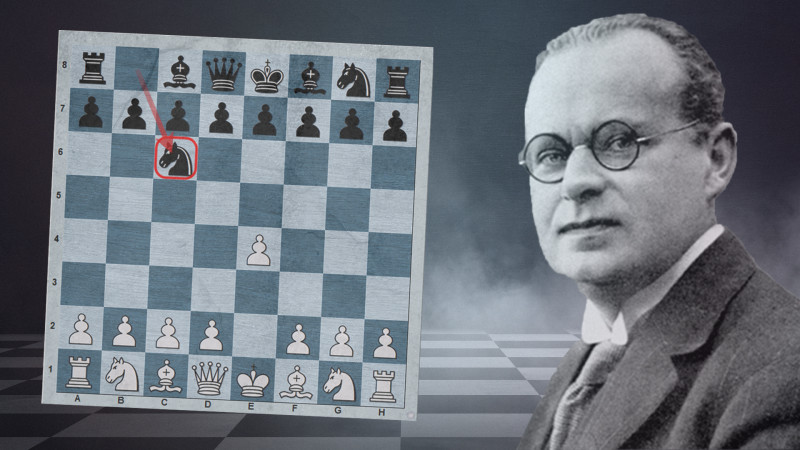 Over the course of history, some players made huge contributions to the evolution of chess – one of the most prominent being Aron Nimzowitsch.

During the 1920s, Nimzowitsch released his famous book "My System" which introduced many important elements of modern chess theory. He spoke about the importance of playing in the center, gaining positional advantages, the art of exchanging pieces, and many more concepts that are now widely accepted within the chess world. 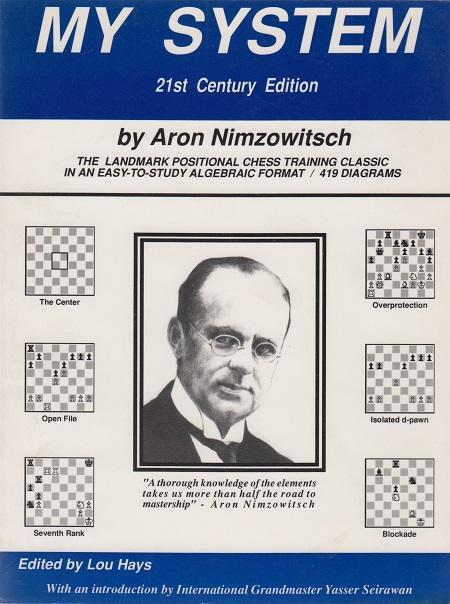 But not only did he revolutionize aspects of the way we play chess today, but he also made huge contributions to chess openings.

For example, against 1.d4, one of the main modern openings, the Nimzo-Indian Defense is named after him. 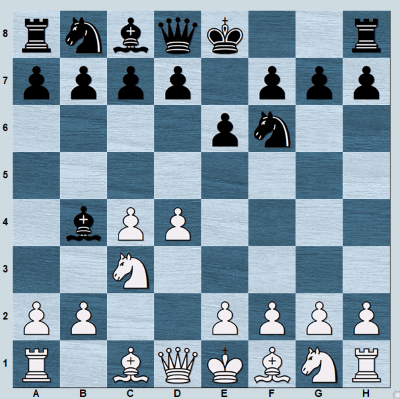 Also, he developed an interesting reply to 1.e4. – 1...Nc6! And after playing it so often and so successfully, this opening was named after him too.

Later, many other Grandmasters adopted it into their opening repertoire. Grandmasters Bogoljubow, Knaak, Miles, Shabalov, Zubov, Bachmann, and Gelashvili made huge strides towards developing the Nimzowitsch Defense.

Even Carlsen and some other top Grandmasters sometimes play it - though mostly in blitz and rapid games.

Why not in a classical time format?
Despite the efforts of many Grandmasters, 1...Nc6 - Nimzowitsch’s Defense doesn’t solve all of Black’s opening problems.

But before I explain further, I’ll show you the main ideas of this tricky defense, the upsides and downsides, and then how I recommend you should play against it.

The idea of 1...Nc6 – the Nimzowitsch Defense

In our courses and daily lessons, I often share the importance of not showing our cards and provoking our opponents into showing them first.

With the move 1...Nc6, Black tries to achieve exactly that. By moving the Knight out, they aren’t showing whether they’re looking to move the "e" or "d" pawn, or whether they’re going to advance them by one square or two.

This leaves White to decide whether to play 2.d4, 2.Nf3, 2.Nc3, or a different move to fight for the center.

The most logical move, in line with the opening principles of grabbing the center, is to play 2.d4 and threaten to push 3.d5 with tempo.

But here Black plays 2...d5!, playing a kind of delayed Scandinavian Defense, opening their queen, and attacking the e4 and d4 pawns. 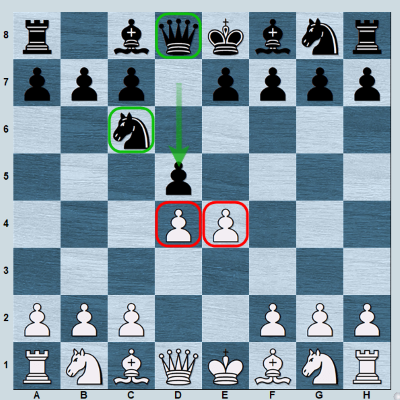 If White takes on d5 – 3.exd5 after Qxd5 Black has already developed two pieces, gaining an advantage in development and putting pressure on the d4 pawn.

If White plays 4.Nf3 Black continues developing their pieces and pressuring the d4 pawn at the same time playing 4...Bg4 5.Be2 0-0-0! and getting a very active and pleasant game. 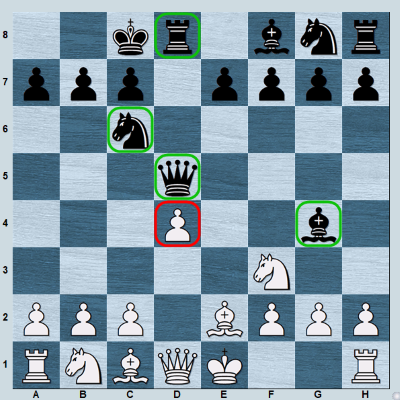 Notice that we have this position in our Scandinavian Defense course, but included the moves h3 and Bh5, which make a big difference. 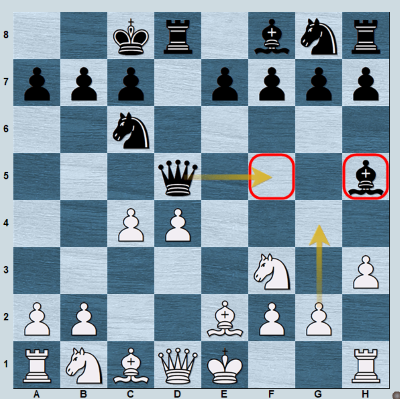 But when Black plays with 1...Nc6 2.d4 d5 – a delayed Scandinavian, after 3.exd5 Qxd5, White doesn’t have the opportunity to include the important move h3, and Black gets a very active and rich position!

Let’s see what other options White has.

After 2...d5 another option that White has is 3.e5, after which Black plays 3...Bf5 and then e6, getting a strange French type of position.

On the one hand, Black doesn’t have the standard counterplay idea of playing c5 – a typical idea in French structures. But on the other hand, Black has solved the problem of the light-squared Bishop. 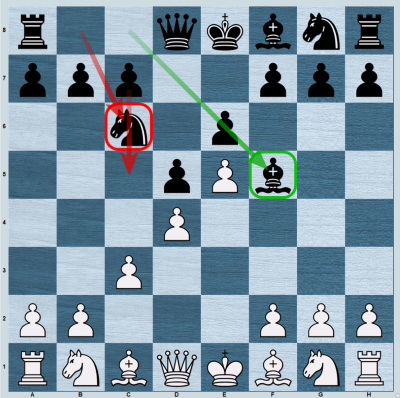 Additionally, Black has an interesting plan with playing Qd7, 0-0-0, and then f6 trying to break White’s strong center. 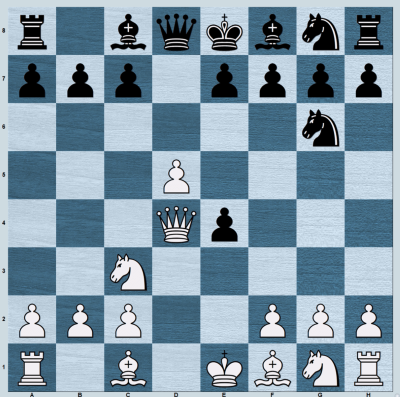 In all of these variations, the positions are very playable for Black, especially at a lower level.

However, the main drawback of the Nimzowitsch defense is that it’s very unclear what to do if instead of 2.d4, White decides to play 2.Nf3, still not showing their cards and asking the opponent to do it first. 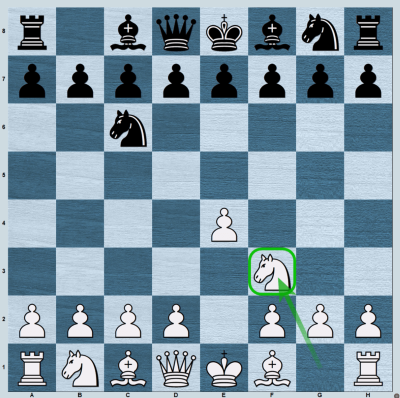 As you’ll soon see, most of the time it will transpose to your regular openings. Let’s see Black’s options. 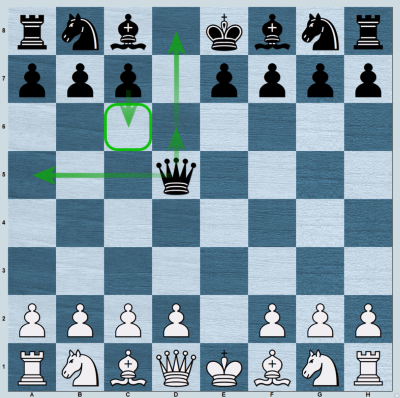 Oops… Black has the Scandinavian with a misplaced knight on c6. 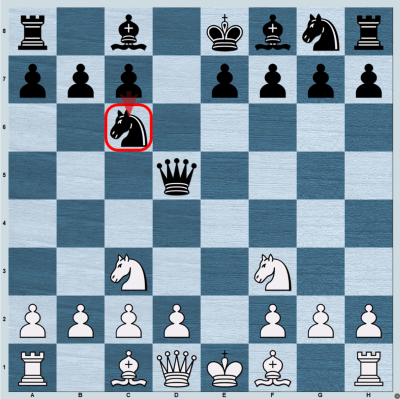 When Black can’t play c6 anymore, it’s not their only headache.

After Black’s Queen retreats somewhere, we can choose to play 5.d4 with d5, or 5.Bb5 – a very annoying move for Black, pinning the knight.

(If you didn’t know about the move 3.Nf3 against the Scandinavian Defense, or knew it but haven’t watched our course yet, I think you will start to feel the idea of 3.Nf3 as a waiting move.)

Coming back to 2.Nf3 against the Nimzowitsch Defense, let’s see what other options Black has.

If they play 3...e6, playing some sort of a "delayed French Defense", they trick themselves.

After 3.d4 d5 4.e5 they still have the problematic light-squared bishop on c8, but also a misplaced knight on c6, which stands in front of the c7 pawn, not letting Black getting the standard counterplay for French pawn structure with c5. 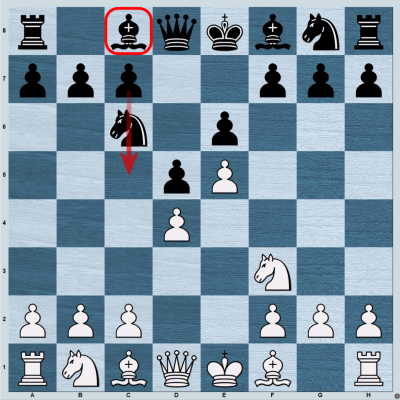 The next option Black has is 2...d6, and this move you’ll face most of the time playing against someone who plays the Nimzowitsch Defense.

However, as we’ll see soon, Black tricks themselves by playing with a "delayed Pirc Defense".

Again, the knight on c6 will be misplaced. All the time Black should be careful with the d4-d5 idea and Bb5 move. 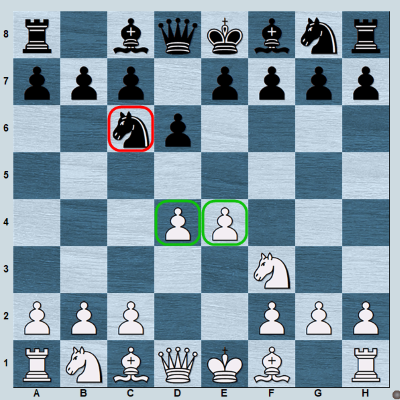 We covered this position in our Philidor course, in the 3...Nc6 section. 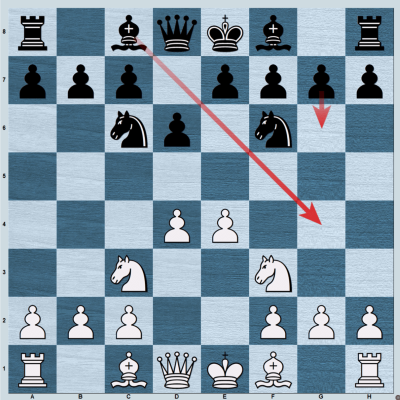 4...e5 would transpose to the position, which they could get playing e5 on the 3rd move.

The problem with this move is that Black has a Pirc Defense with a misplaced knight on c6.

Black should always be looking at the option of d5, but with the drawback that they don’t have the standard counterplay in the queenside of playing with c6, b5, or c5!

We play 5.Be3 Bg7 6.Qd2 planning to castle long.
This is a very aggressive system against the Classical Pirc Defense, where the main counterplay for Black is related to the move c6! 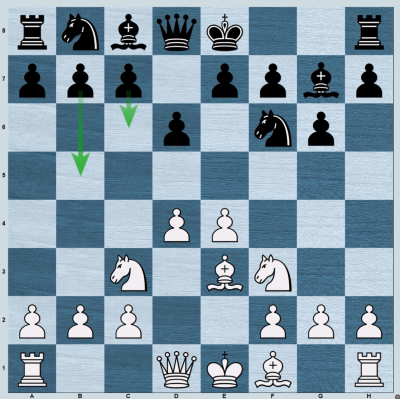 Black plays whether c6 or b5 immediately, or after 0-0.

In our case, Black’s Knight is already on c6!
Oops…? 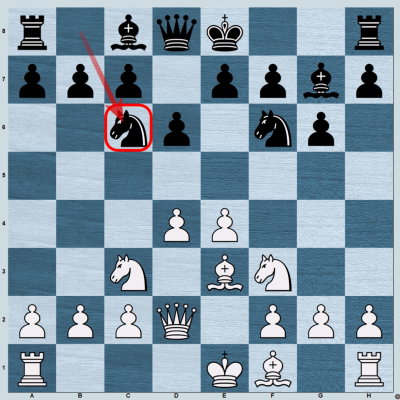 However, the moves Nc6 and Bg4 have one big downside – the move 5.Bb5 becomes very annoying.

However, while I was analyzing these variations and preparing our course, I found that 5.Be3 is even stronger. White waits for Black, again, asking them to show their cards. 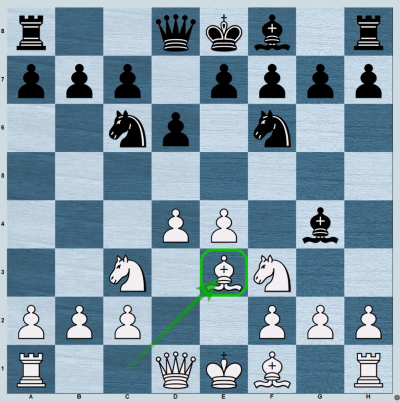 If Black plays 5...e5 then 6.Bb5 becomes even stronger than in the previous move. Now white’s threatening not just 6.d5, but also 6.de5! 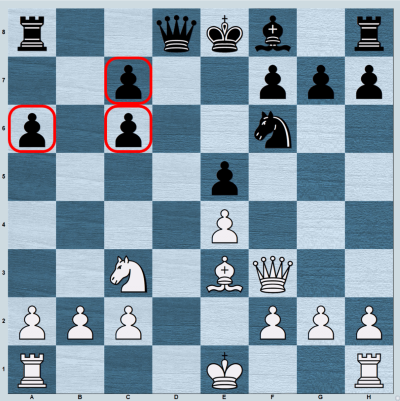 6...exd4 would be Black’s best option, however after 7.Qd4! With the idea of 0-0-0, White’s much ahead in development. They are ready to push the pawns on the kingside, launching a very dangerous attack, starting with the moves h3 and g4.

If Black takes on f3, doubling our pawns, they’ll open the "g" line for our Rooks. 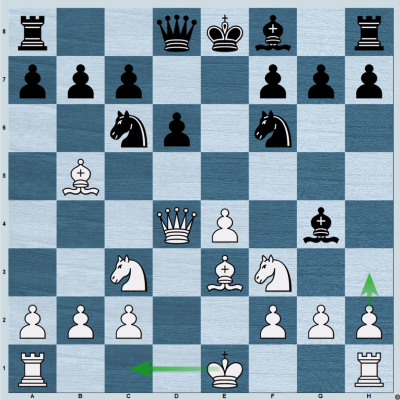 The next move Black prepares to play d5, getting a better version of the French Defense, as they solve the problem of the boxed-in light-squared Bishop. 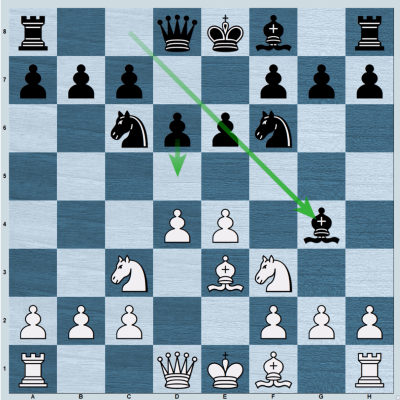 However after 6.h3 Black has an unpleasant choice – whether to go Bh5 or give up the bishop.

If 6...Bh5 then White instead of leaving Black to play d5, play it themselves! 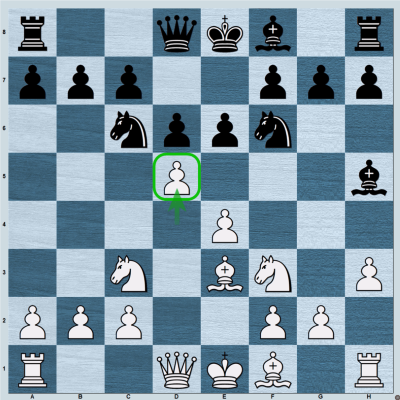 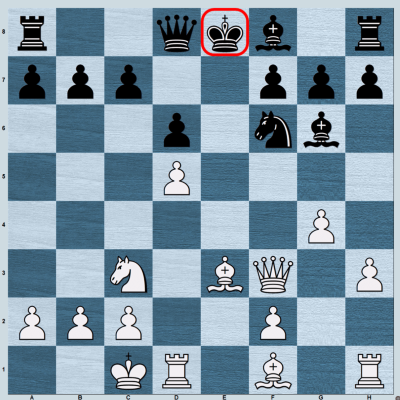 White’s ahead in development, Black’s King is in the center, and the light-squared Bishop is misplaced. Instead of being on c8, Black’s Bishop spent three moves being attacked with h4, h5 and allowing White a very unpleasant check Bb5! (there is no Bd7).

So, 5.Be3! is almost refuting all of Black’s ideas…

What else could Black do? 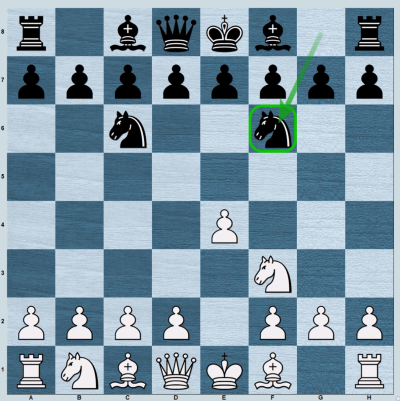 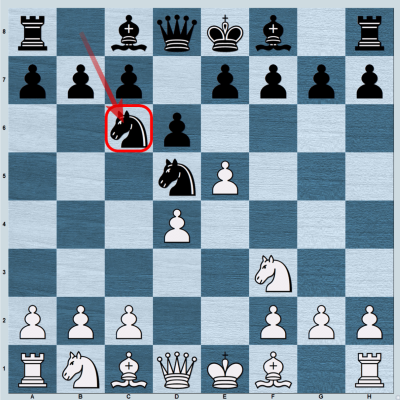 If you have watched our course, you might remember the refutation of this variation. 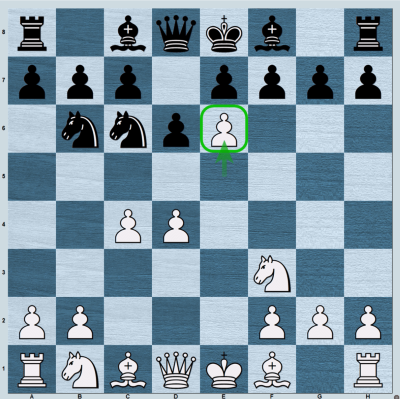 Black can’t take 6...Bxe6 because of 7.d5, and if 6...fxe6 7.Nc3 White has a very strong initiative for the sacrificed pawn, as Black has big problems with their development.

As by now you will have noticed, it’s not the first time, when after 1...Nc6 we transpose to another opening, where the knight on c6 was misplaced. 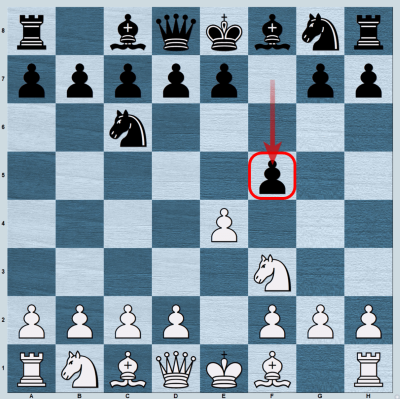 While there are many interesting gambits, this one is very dubious and we have a blog and a course on showing how to refute this line.

The question is whether they should learn to play 2...e5, in which case it is better to play e5 on the first move ?

Does it mean you shouldn’t play 1...Nc6 with Black pieces?

No, not at all! While I hate that some coaches teach super dubious gambits and try to market them with nice words like "beat Grandmasters with this gambit", 1...Nc6 is very playable and practical, especially at a lower level.

Why is it practical? Because there are not many people who know all of these nuances I shared with you. Myself, I didn’t know much about it even 1 year ago.

I have a student, who plays the Nimzowitsch defense very successfully at below 2.200 level. Most of his opponents don’t know much about 1...Nc6 and find themselves out of opening theory very soon.
This is the main weapon of all 1...Nc6 players – surprising your opponent and taking them out of theory.

Additionally, if someone playing White faces 1...Nc6 for the first time, it’s very easy to play 2.d4 and mess up very fast after 2...d5!

So, if you play the Nimzowitsch Defense at a lower level, keep it, it might be a very dangerous weapon. But if you’re often facing 2.400+ players, it might be wise to learn a more fundamental opening and keep the Nimzowitsch Defense as a reserve weapon. Or you can play it in blitz and rapid games, as Carlsen sometimes does to surprise his opponents.

And if you're looking for a solid way to counter the Nimzowitsch Defense, you can watch our course on the same. If you’re a PRO Member, you have free access to all our courses including this one, as part of your membership.

P.S. In our forum, you can share your thoughts and ask any questions about the article.

P.P.S.Thanks for all your support, for sharing our articles with your friends, and for subscribing to our blog.

See you at the same time next week!