Falling for the tricks of the Stafford Gambit? Not anymore! See move-by-move how to crush it, along with all the ideas and the traps to avoid!

The Stafford Gambit has experienced a surge in popularity, thanks to some chess streamers who have covered it on their channels and even created courses about it.
It begins with the moves – 1.e4 e5 2.Nf3 Nf6 3.Nxe5 Nc6.

Black sacrifices a pawn on the third move. But is it a sound gambit? Should White accept the gambit to gain an advantage? Or should they decline it?

After researching most of the videos and articles, and working with different engines, I came to an interesting conclusion.
Of all the abracadabra gambits, the Stafford Gambit is objectively the worst one but at the same time practically the best.

There are so many traps and dangers.
And at below 1,500 level, I wouldn’t be surprised if Black has a positive result with this Gambit. However, if White knows how to play correctly, Black ends up in a completely lost position.

The good news is when you face the Stafford Gambit playing with the White pieces, you’ll need to remember just the next 3 moves! And then practically the game is already over ?

But before we get there and I show you the easiest refutation of the Stafford Gambit, let’s start with the history. Then we’ll see the ideas behind this gambit, the main traps and tricks, what the downsides of this gambit are (besides the sacrificed pawn), and why it’s never played at the top levels.

Lastly, I’ll show you how to refute this gambit and punish opponents for daring to try something so dubious against you!

The History of the Stafford Gambit

According to my database, the first time the Stafford Gambit was played was during a simul in 1857 by the player Howard Staunton. Unfortunately for him, he lost the game. However, had he played correctly he could’ve gained the upper hand.

But, the name of the chess opening comes from Joseph Stafford, who first played this line in a correspondence match back in 1950.

This also turned out to be the last move of the game. Can you spot what Black played?

Any fighter who knows the ideas from our article about when you should resign, wouldn’t resign here. However, the position indeed is lost.

Despite some nice short victories by Black, this line never gained popularity. No chess World Champions or classical players gave it a try – probably knowing they risked getting into a lost position from the very beginning if their opponent was to know how to react.

The ideas of the Stafford Gambit

By starting the game with the Petroff Defence (also known as the Petrov Defense or Russian Defense), 1.e4 e5 2.Nf3 Nf6, after 3.Ne5 Black instead of the main move 3...d6 plays 3...Nc6, offering a pawn sacrifice.

Their Queen and Bishops have open lines to jump to active squares.

Another important point is that White’s e4 pawn is under attack at the moment and they have to spend time defending it.
As a result, Black has a lead in development.

This gambit is well-known to be full of traps and tricks. One small mistake can lead White into a lot of trouble.
Here are the most important Stafford Gambit traps to be aware of:

A similar idea, using the power of the Bishop on c5, Black has another trap.

Or before resigning make their opponent even prouder playing 10.g3 Qxg3#

Instead of 9...Qe5 Black should have taken the e5 pawn with the Knight and had a fine game.

This is a very illogical move. Instead of solving the problems with the development of the kingside and the f2 pawn, White develops a piece from the Queenside, weakening the b2 pawn as well.

For example after 6...Qd4 White would regret their last move.
But after 6.Bg5 there are even more unpleasant surprises. 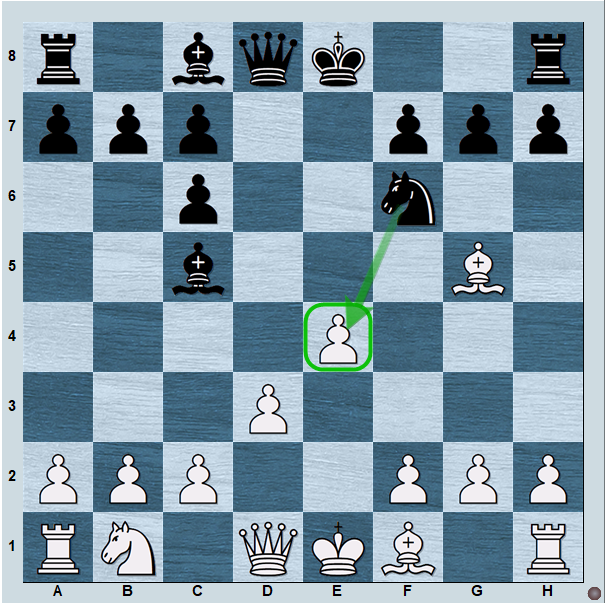 Even the engine doesn’t see this move at first. Now if White plays 9.Qe1 defending the f2 pawn, they’re lost after 9...Qe5! (there is no e5 move any more!)

This is also an illogical move. Instead of solving the problem of their development, White makes a move with a pawn, where it’ll be attacked in the future anyway. According to engines, Black’s best move is 5...Nd5 with some compensation.

But there are other traps after 5...Ne4. One we have seen already.

But there is a much easier way to counter the Stafford Gambit, so we don’t play the illogical move 5.e5, at least for 5...Nd5.

There are many other traps, but now you know the main ones.

Now let’s start with understanding the downsides of the Stafford Gambit.

The downsides of this opening

1. They’ve got double pawns c6 and c5
2. They’ve no longer got any central pawns!

This means if White can handle Black’s initiative, they’ll not only be a pawn up, but have a strategically winning position.

One of my coaches used to joke in such cases: “You’re not just lost, but also a pawn down” ??

5.Nc3 is another good and logical move, but soon you’ll see why I advise playing 5.d3 instead.

After 5...Bc5 (The move which Black was going to play after 5.Nc3 as well), let’s dive deeper into position.

We’ve already seen how strong the Bishop on c5 is.
What if we try to limit it by playing c3 and d4 at some point?

We won’t just do it with a tempo, but we’ll also limit our opponent’s Bishop and gain the center!

Let’s start with the most dangerous one.

Now, all Black’s all pieces are staring at the kingside and are ready to start attack if we castle short.

What do we do instead?

No short castle – no checkmate! ?
Instead, we’re going to take the center with tempos.

And now again the same slogan, that kills Stafford Gambit.
No short castle – no checkmate!

We play 9.Nd2! – developing the Queenside. And this move comes with a tempo.

We want to play 10.Nc4! getting Black’s dangerous Bishop.

In the course about the Stafford Gambit, you’ll find some model games and see how to convert this big advantage.

This idea we have used ourselves in the Elephant Gambit.
Do you remember it?

Now it doesn’t give much to Black. Yes, they get a Bishop pair, but they were a pawn down and should have tried to avoid exchanges.

But I recommend you to simply remember the slogan, no short castle – no checkmate, and play 7.Rf1.

Anyway, we’re going to castle queenside in the future right?
And after 7.Rf1 the moves c3, d4, and e5 all come with tempos.

While facing the Stafford Gambit opening, you just need to remember the following 3 things...

3 Things to Remember When Facing the Stafford

Other Refutations of the Stafford Gambit

If you forget to play 7.c3 after 6...h5, you will also have a completely winning position. But as you’ve seen, it’s very useful to seduce Black’s Queen to d6 and win additional tempos in the future.

If somehow you forgot and played 6.h3 instead of 6.Be2!, no worries. The engine says it’s still winning for White.
Just take a deep breath, switch to defensive mode and handle your opponent’s initiative.

Especially if you’ve watched Grandmaster Johan Hellsten’s course about defense, you should be able to solve these temporary problems.

This move is also a good refutation, but 5.d3 is much easier.

This idea you can also do when starting 5.Qf3 or 5.Qe2

The ugliest move to refute this gambit 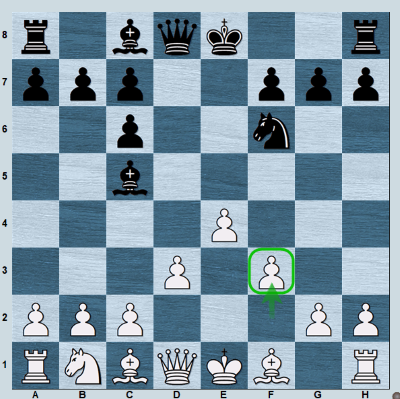 White defends the e4 pawn and controls the g4 square.
Next, they either prepare to play c3 with d4, or Qe2 with Be3.

Do you need to try this? No! ?
Our way is much easier.

This is just something fun to know – even 5.f3 works ?
There are many other ways for refuting the gambit, but this is enough. I don’t want to overwhelm you with information you don’t need now that you already know the easiest way.

Until what level can you play Stafford Gambit for Black?

But if someone tries to persuade you to learn it, or shows you how they can beat Grandmasters using it, you shouldn’t buy into that idea easily. For sure, they’ll not show all the games where they were beaten very badly ?

Another downside of learning to play the Stafford Gambit is that after 1.e4 e5 2.Nf3 Nf6 you should learn how to play against 3.d4!? – one of the main moves against the Petroff Defense.

If you need to learn so many things in order to play such a dubious gambit, isn’t it much better to learn a fundamentally sound opening instead? ?

Now for the last downside.
Let’s say you play the Stafford Gambit with the Black pieces and successfully trap your opponents without calculating any moves yourself.

You don’t learn anything. And despite getting a few rating points and satisfying your ego in the short term, you won’t gain much in the long term.

But when opponents don’t fall for the traps, you’ll hate your opening choice, being forced to play without a pawn (or worse) for the whole game.

The best sources to learn the Stafford Gambit

If after all these considerations you still want to learn this chess opening, it’s your choice ?

There are many articles, videos, and even a book about it ?
But the best source to learn it is Eric Rosen’s Youtube Channel.

Unfortunately, the gambit is too dubious, and White has multiple ways to refute it.

If you want to remember the variations better, see Black’s other options and watch some model games that show how to convert the winning positions, check out our video course: Stafford Gambit – The Refutation

You can also check out the daily lesson with a Grandmaster where I show you these variations over the board. It should help you to visualize and memorize what you need to know.

Best of luck when you face the Stafford Gambit.
And don’t forget. No short castle – no checkmate! ?

P.S. Do you hate facing the Stafford Gambit? Have you fallen for some of its traps and lost some games? Did you love the refutation I’ve shown?

Feel free to share any of your thoughts in our forum!