Chess isn’t for the Weak 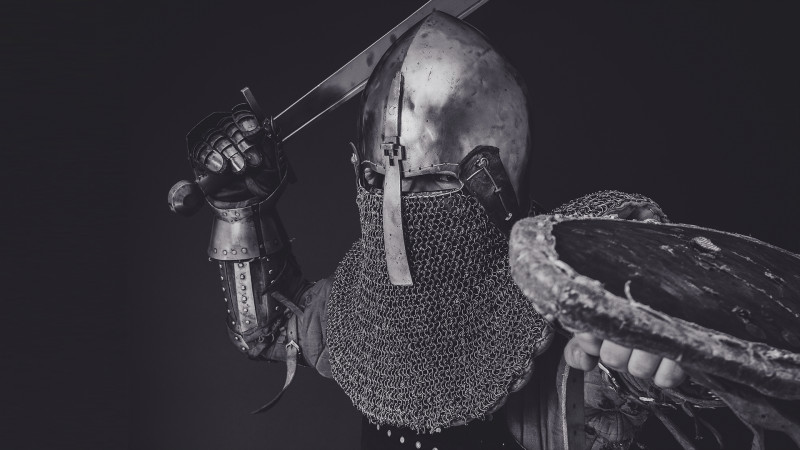 During my life, I’ve seen so many people who stopped playing chess after their first painful defeat, and till now, over and over again, I hear stories like: “In a winning position, I made a horrible blunder and lost the game. After that, I didn’t want to play chess anymore.”

It’s okay to quit chess if you don’t enjoy it anymore. But quitting it because of a failure or a painful defeat is a sign of weakness, not in chess only, but in life overall.

During your chess career and life, you’ll get many punches to the mouth. What you need isn’t to be strong enough not to fall but strong enough to fall and be able to get back up on your feet.

In my chess career, I can recall a very tragic story. One that I tried to forget and never look back at again. But when I see so many people quit after their first failure, I’ve decided to share it with you.

I was 17, and I had a goal to become a Grandmaster in less than 2 years.
I had a very strong “why” (you already know it from the article about WHY ), and I was absolutely committed to my goal.

The 1st league would start in June, and I started preparing for it in January.
Even though I wouldn’t be in the top 10 of the starting list, I believed I could be qualified.
In Armenia, summers are sweltering, and winters are too cold for one to get up from bed easily.

During this period, I woke up at 7 am every day, went to the park for physical exercises, then after coming back home had a quick shower, a quick breakfast, and started working on chess from 8 am.

I went to the tournament with excellent preparation.
Not only had I improved my opening repertoire, calculation skills and all the other necessary skills, but I was also in excellent physical shape and had a champion-mindset.
I knew I could do it, and I knew I had done my best during the preparation…

At the 1st board

I started the tournament very well, and in the 3rd round, I took the sole lead defeating my future good friend (at that time, I didn’t like him at all :D ) and future Grandmaster GM Hrant Melkumyan.
I played at the first board for the rest of the tournament, being the tournament’s sole leader.

In the last round, my opponent was future GM David Petrosyan (he was still an IM at that point). As I was playing with the white pieces, a draw would be enough for me to secure myself a top 3 finish and qualify for the Championship. But if I lost, I’d be in 4th :)

I wasn’t nervous and went into the last game in a positive mood. I knew that playing for a draw was the quickest way to lose, so my plan was to simply play good chess as I had done during the whole tournament.

The opening didn’t go very well for me. We went into one of the sharpest variations of the English opening, and I couldn’t memorize my preparation for it.

And here, he took on f2 very quickly. 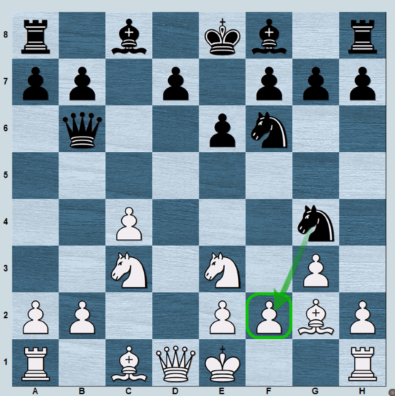 I was ready to play fighting chess, even though a draw was enough to accomplish my goal. But it was not my plan to get into such a complicated line right from the beginning. 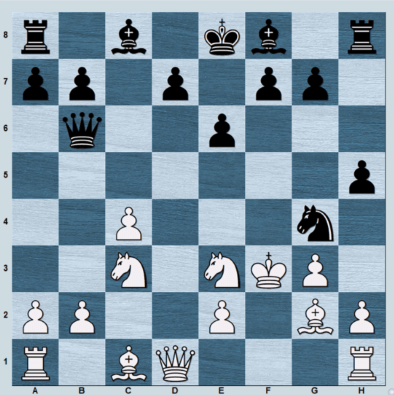 I was sure that this wouldn’t work and that the opponent was bluffing.
I had 2 problems:

At this point, I’d already spent a good amount of time on the first 10 moves (trying to remember my preparation, specifically, the difference between 5.Nc3 and 5.g3, and 7.Nc2 and Nb3).

The other problem was that I had a wide choice then, as there were too many candidate moves to choose from. In addition, on the next move, after my opponent’s Qc6 move I’d have another choice make.

I tried to keep myself calm and calculated many variations.

In the end, I found an easy solution based on the tournament situation. 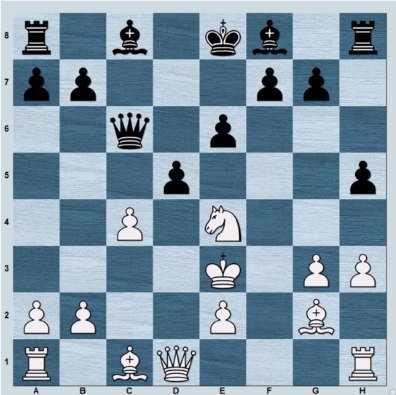 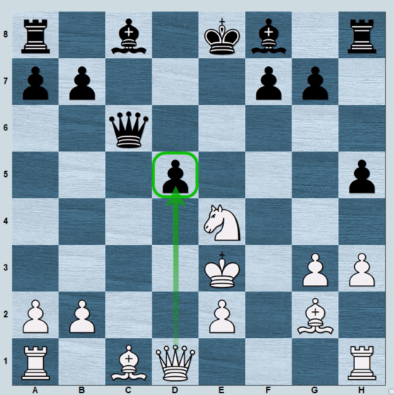 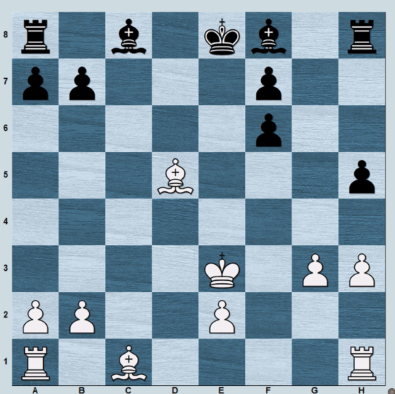 The material is equal, we both have equal weak pawns. The position is very drawish, and there isn’t much space for making mistakes.

From this moment nothing extraordinary happened and soon we got to an absolutely drawish Rook endgame.

He’ll take on a2, I’ll take on h4, then I’ll play Rh8, with the move Ra8 in mind, putting my Rook behind his pass pawn, and even if I didn’t have the h3 pawn, the Rook endgame would be drawish.

From the playing hall where there were lots of chess lovers following the tournament on the demonstration boards, a loud noise was heard.

I turned to look at them to see what had happened and saw that they were all whispering something and pointing out to the demonstration boards.

I turned back to the demonstration boards and saw this picture: 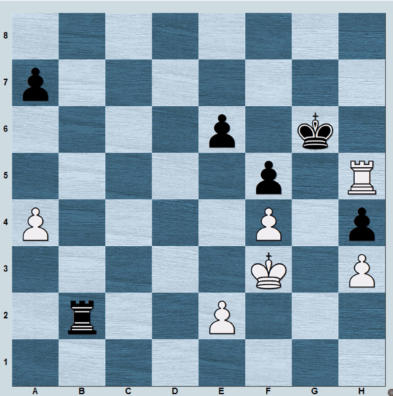 “The demonstrator misplaced the move and instead of 35.Rh4 he has put 35.a4 on the demonstration board”, I thought, “And that’s why there was this noise in the playing hall.”

I smiled slightly and turned back to my board, where a terrible surprise awaited me: the same position was on the actual board!

In shock, I checked my blank and saw the written move 35.a4.

I tried to close my eyes and open them again like we do when we have a nightmare in our dreams. I couldn’t believe I was so hypnotized to play 35.a4 during such an important game.

Even an absolute beginner would take the Rook away from there.

I tried to calm myself down.

As discussed in the article “It’s never too late to resign”, I waited for his move.
If I was so hypnotized, maybe my opponent was too?!

I was trying to breathe, calming myself down to prevent myself from having a heart attack.

Then, after a few seconds, my opponent sighed and captured my Rook.

At an earlier age, I had learned to accept defeat like a gentleman.
But this one was not the case.

I stopped the clock immediately, shook his hand, signed the papers and ran out from the playing hall.

I was in absolute shock and was experiencing one of the most stressful moments of my life.

I was in absolute shock, and probably that was one of the most stressful phases of my life.

I had been preparing for this tournament for 6 months! Everything went so well, and I made such an inexplicable mistake at the last second.

I couldn’t eat anything the following days, and I couldn’t speak to anyone and I didn't touch my chessboard for a month. And, most probably, I would have quit altogether if I didn’t have a strong “why,” and wasn’t committed to my goal.

Gradually, I started finding the power inside of me to get back on my feet, remembering Rocky Balboa’s words:

The world ain't all sunshine and rainbows. It's a very mean and nasty place and I don't care how tough you are it will beat you to your knees and keep you there permanently if you let it. You, me, or nobody is gonna hit as hard as life. But it ain't about how hard ya hit. It's about how hard you can get hit and keep moving forward. How much you can take and keep moving forward. That's how winning is done!”

I couldn’t give up. If I did so, I would have to break all the mirrors I saw in my life, as I wouldn’t be able to look into them and see the loser Avetik. I had to be strong and continue fighting for my goal.

One of the first things I did during the recovery period is that I started analyzing what had happened.

It would be a mistake to call my 35.a4 move a blunder.
It wasn’t one. Even a beginner, playing chess for the first time in their life, would take their Rook away in that position.

As I’ve already shared with you in the article “Learn the Right Lessons From Your Mistakes”, it’s essential to find the root of the mistake and reach the correct conclusions.

After talking to a few psychologists, I found out that I had put all of myself into that tournament, and at the last moment, my body failed due to the pressure, my brain turned off for a second…

I learned a big lesson from it and made the right adjustments not to let that happen again. And who knows where I would be if this tragedy hadn’t happened to me.

Your hard work stays with you

I didn’t qualify for the highest league of the Armenian Championship, but my hard work paid off. During those 6 months, I became much a stronger player, and within 1 year I’d achieved my 3 GM norms.

The following year I qualified for the highest league, and after two years, I not only qualified but also won it, becoming the champion of Armenia.

… However, I might have quit playing chess after my 35.a4 if I didn’t have a certain goal, didn’t have a strong “why” and wasn’t committed to my goal.

2. You’ll get many punches to your mouth on your journey. Find the strength to get back up.

3. Sooner or later the hard work pays off.

P.S. As always, feel free to share your thoughts in our forum.