Learn the Right Lessons From Your Mistakes

Here's why it's important to learn the right lessons from your mistakes... 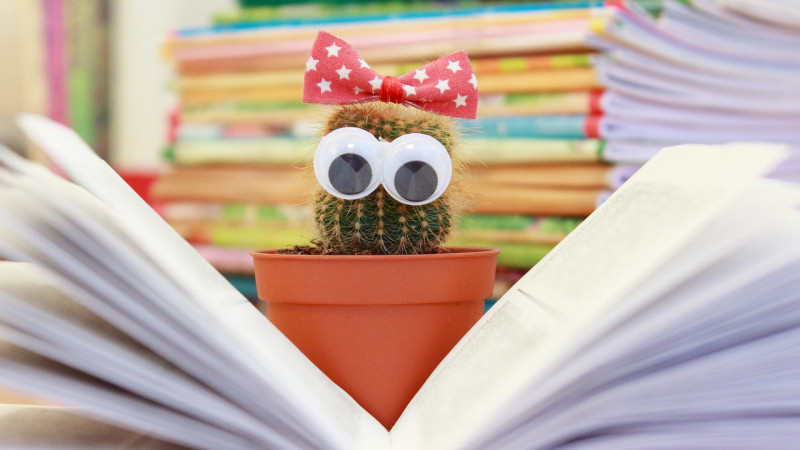 Have you heard this joke?

A man goes to a bar and orders a bottle of whiskey. After emptying it, he asks for another one and then one more. After the 3rd bottle, totally drunk, he decides to eat a sandwich.

A few minutes later, the man, totally drunk, falls onto the floor because of too much alcohol in his blood. A bit later, he opens his eyes and says, “Eh… Everything was good. I just shouldn’t have eaten that sandwich.” 😁

Something very similar happens to many chess players. They play a long game, and in a winning position, they blunder something in the endgame and lose it.
Coming home, they make a decision not to play that opening ever again 😊

We should learn the right lessons from our mistakes instead of deceiving ourselves. 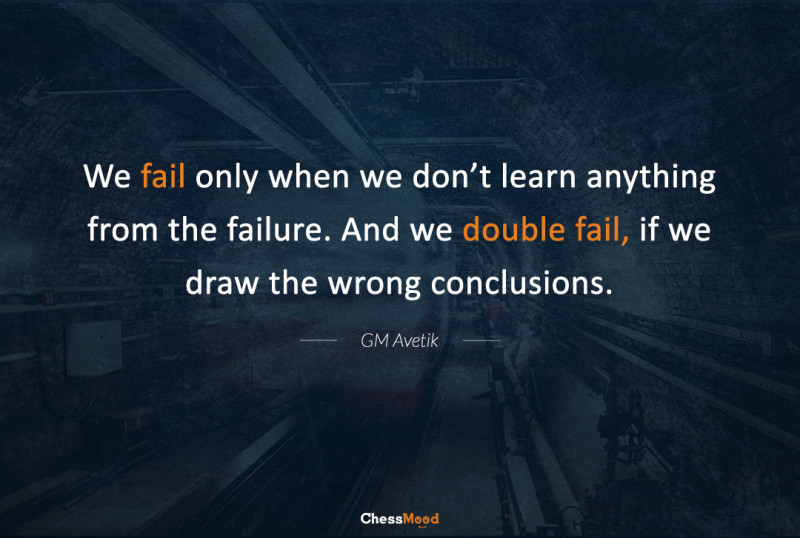 My own funny story

Recently, an amusing thing happened to me.
A few days ago, in the morning, I had a lesson with one of my students, during which I was showing him examples of activating the King (an exciting topic, which later I’ll write about).

Among many games on this topic, I showed him Sveshnikov’s game against Browne. 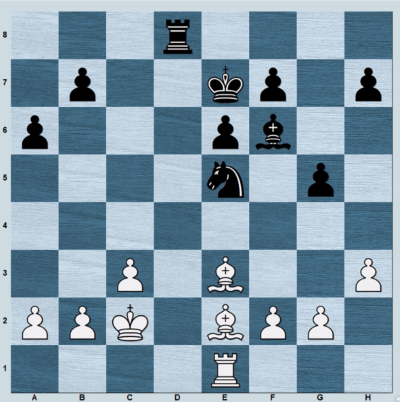 In this position, when White had a clear advantage due to his two Bishops, Sveshnikov chose a very interesting plan.
He played 26.Kb3!?
And then Kb4, Ka5, Kb6, and slowly-slowly grabbed the opponent’s pawns on the queenside. 😊 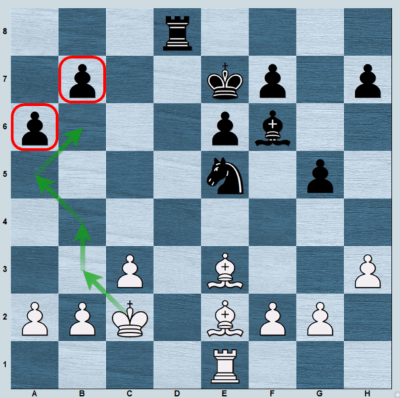 I decided to play a few blitz games on chess.com the same evening.

And in one of the games, I had this position, playing with White. 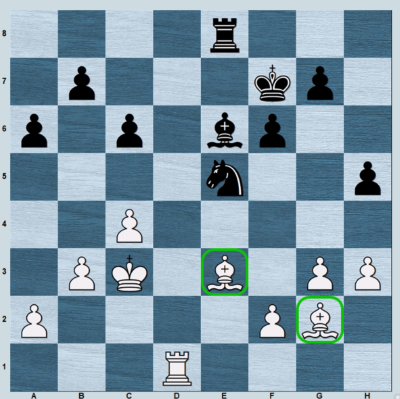 I had a very clear advantage due to my two Bishops.
But I needed a plan on how to convert this advantage.

And then I remembered the morning lesson I was teaching my student.
Activate the King!

A great plan, taking advantage of the opponent’s weakness on the b6 square.

Proud of myself and very excited, I played Kb4, then Kc5.
Thinking, “What a story it will be… My student will love it so much! Just in the morning, the coach taught something to his student, and the same day he applied that concept in his own example.” 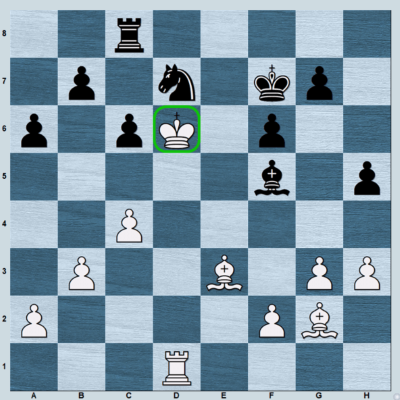 I had a very annoying King for my opponent.
He can’t even check it. If he gives Rd8 check at any point, I’ll play Kc7 and grab all his pawns on the queenside, one by one!

And as I continued playing, excited about my game, about my plan, and proud of my last Bf3 move, I didn’t see the trouble about to come my way. 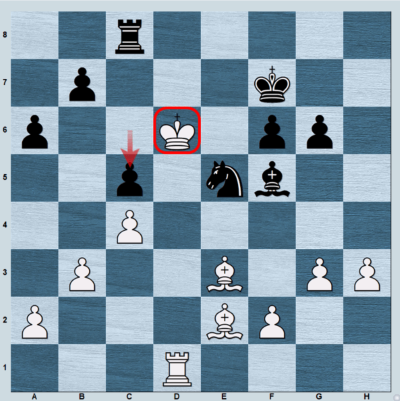 Oops… Now, this isn’t a joke anymore. My King is in danger…
Still not seeing how exactly he can checkmate me, I took on c5 - 33.Bc5, grabbing the opponent’s 2nd pawn. 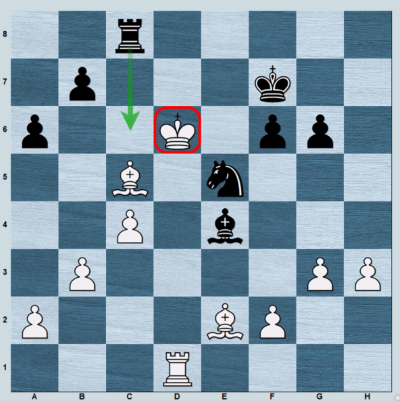 Ah… No way!
After a few seconds, I realized there was absolutely no defense.
I can’t even delay the life of my King with one more move. Next, the opponent will play 34...Rc6 checkmate.
It can even be a pre-move,
I can’t do anything to prevent it.

Realizing it, I started to laugh hard. 😁

In a normal endgame, with a significant advantage, I let my King be checkmated. Somehow I managed to get it killed in just 8 moves 😀 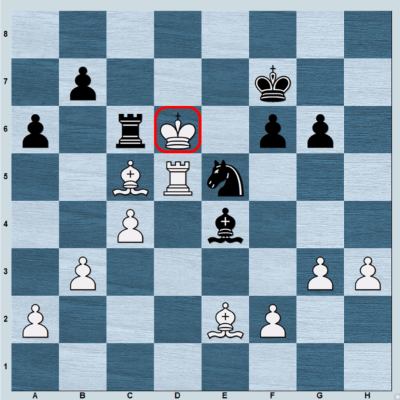 You can see the tragicomedy here.

Does it mean my plan with Kb4 and Kc5 was bad?! Does it mean I should never do such a thing again?
Nope! Not at all; it was a great plan. 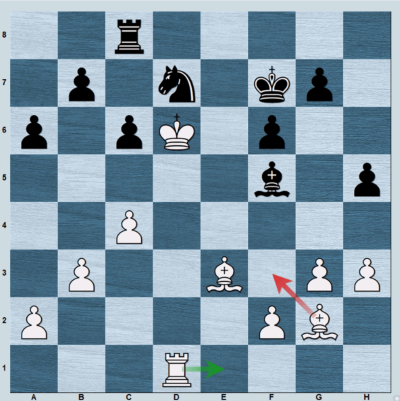 Just here, in this position, I shouldn’t have played Bf3 and taken my Bishop from the long diagonal. My Bishop is doing an important job there, controlling the c6 square, and not allowing the opponent to play c5.

I should have played Re1! Then move my Bishop from e3 with the idea of Re7!
I would almost have a winning position.

If I decided for myself that I’d never do such a thing again, it would be very wrong.
My plan was excellent.
I should just learn the right things from the lost game.
Here is what I learned.

Activating the King in such positions is a great plan, but...
It’s not very practical in Blitz games or when you don’t have much time to figure out what’s happening!

In a standard game, I would realize that I shouldn’t take my Bishop from the long diagonal and easily find the move Re1.
But it was a blitz game, and I didn’t realize it at all.

Also, one of the rules in blitz games is “Keep your King safe”.
Because with very little time, it’s hard to play with an open King or with a King in danger.
I didn’t follow it and got punished.

As I said at the beginning of the article, many chess players blunder in the endgame in a winning position and blame their choice of the opening. Seriously, I’m not joking or exaggerating.

This really happens.  It’s human nature to blame someone else, something else, but not ourselves.

I repeatedly see people learning the wrong lessons from their mistakes.

But it’s more dangerous to make a mistake and learn the wrong thing from it.

Drawing the correct conclusions from the lessons, you learn in your life, and your chess career is a must-learn skill for moving forward faster. 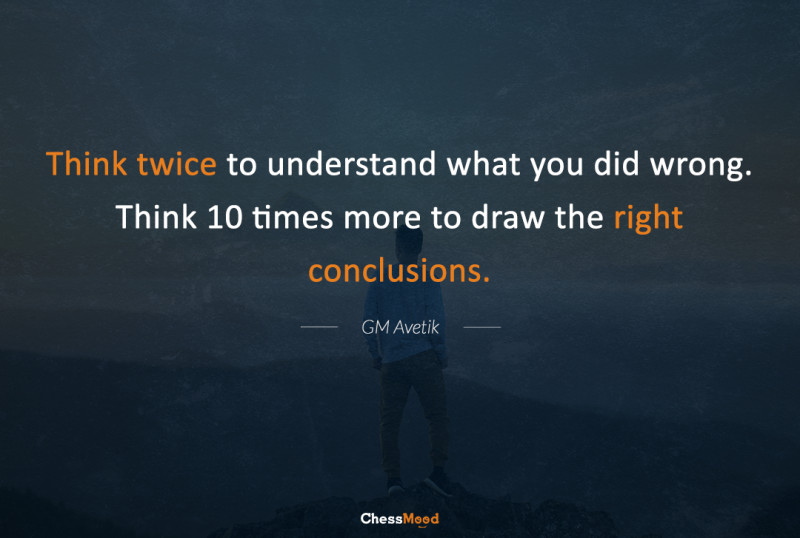 P.S. Champions and future champions, I wish you good luck in your games, smartness when analyzing them, and wisdom to draw the correct conclusions.

Don’t forget to subscribe to our blog and share this article with friends who have a habit of closing their eyes and blaming others or wrong things for their mistakes.

P.P.S. You can share your thoughts about this article in our forum. Also, check out our course on reducing blunders where you'll find some hidden but common reasons behind blunders, as well as the steps to overcome them.