Ostrich syndrome and the tale of 3 Grandmasters

Have you heard of the Ostrich Syndrome? Through a tale of 3 GMs, you’ll understand what it is, how it affects progress and how to overcome it. 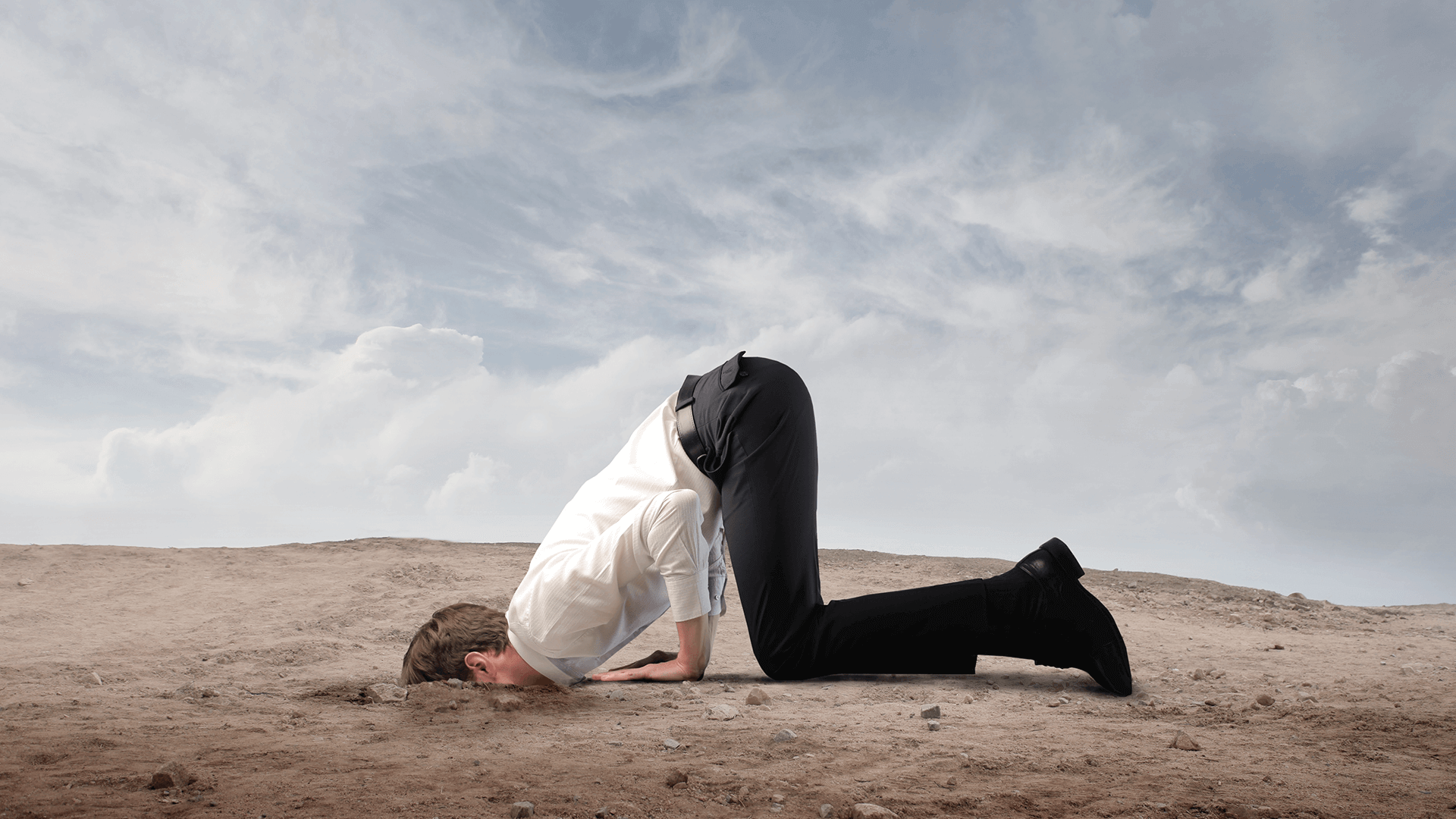 “You can’t fix something unless you admit it.” - Tim Grover

There are many reasons why chess players get stuck at their level and stop improving. Today we’re going to speak about one of the main ones – ostrich syndrome. But before we get there, let me tell you a story.

A tale of 3 Grandmasters

Once upon a time, there were three guys – all of whom were 2,600+ GMs in their twenties.
One of them decided to retire and switch to coaching. That was me ?

But the story I want to tell you is about the other two guys, with whom I worked closely even after my retirement.
In order not to reveal their real names, I’ll call them “Adam” and “Ben”.

Whenever Adam came back from tournaments with bad results and I asked him what had happened, he would give me different excuses every time:

“It was very hot in the tournament hall”.

“My hotel room was next to a club so I couldn’t sleep at night”.

“The food was very bad and I couldn’t get enough energy”.

... And many other strange excuses.

On the other hand, if Ben came back from a tournament with bad results and I asked him the reason for his bad play, he would only blame himself.

“I didn’t prepare very well for the tournament”.

“After the 2nd bad game, I wasn’t mentally strong enough to regain my confidence”.

“My calculation was very slow. I should have solved some puzzles before the tournament”.

Each time he would admit his mistakes and refuse to blame others.

Once he even got sick during the tournament and played the whole tournament with a fever.

Bad luck… happens to everyone. But do you know what he said later?

“Before the tournament, I was working too much on chess and I didn’t spend enough time on my physical health.”

You can probably guess what happened to these 2 Grandmasters.

The moral of the story?

Once you start blaming others, you’re admitting you have no control over the situation. And without that control, you can’t create a solution.

Never allow external pressure to dictate the outcome. Face it, fix it, and prepare to do better next time. 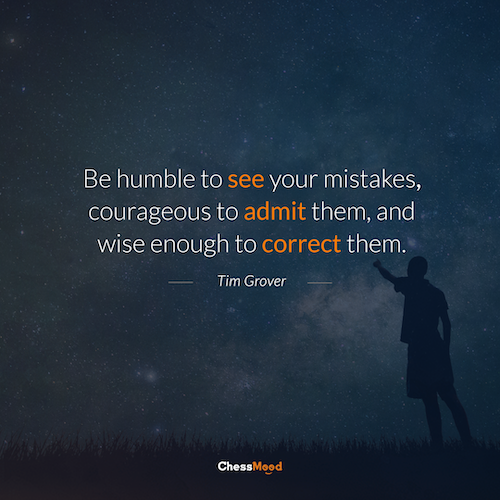 Have you heard about ostrich syndrome? And why do some people avoid admitting their mistakes?

Let’s start by talking about ostriches. If you aren’t aware, ostriches are birds that are renowned for putting their head in the sand... 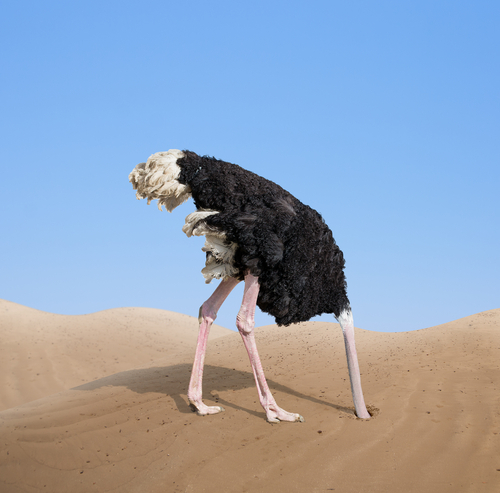 The myth is that ostriches try to avoid any dangers by ‘not looking’ directly at them. This is exactly what ostrich syndrome is ー looking away from problems and not admitting their existence.

In reality, an ostrich actually buries its head in the sand to make space and lay eggs.

But what about people who bury their heads in the sand? Those who know they have made a mistake or have a problem but don’t want to face it?

These are the people who suffer from ostrich syndrome.
And in chess, there are many players who have it.

The path to improvement lies in facing the problems head-on.

Only the brave can admit it

Whenever and wherever there’s an issue, the #1 step to solving it is being aware of the issue and having the courage to admit it.
Now you might be wondering, why do you need to be courageous?

Well, the answer is because our ego doesn't want to be attacked. And it’s much easier to blame everyone and everything else, except ourselves. Then our ego is satisfied. But the way to greatness is to ignore it and do what needs to be done, instead of constantly trying to please it.

We all screw up

I like reading autobiographies of successful people for one important reason.

Normally when you watch or read something about successful people, you only see the bright side – how great they were, what smart decisions they made, how they were destined to become rich and famous...

But when you read their life stories written by themselves, you see how often they screwed up – how often they were close to the edge, the bad decisions they made, how they came back...

You see how they admitted their mistakes, learned from them, and managed to improve as a result.

I can’t remember whose quote this is, but it’s a key mindset to have:

“I’ve made tons of mistakes, I’m going to make plenty more. But I never think of them as failures.”

And the next quote is my favorite which you might remember from my article “Mistakes are not failures.”

If you keep these in mind, it will be much easier to start admitting your mistakes. And when you admit your mistakes easier, you grow faster.

What are the most popular answers that chess players give if you ask them “why did you lose?”

I remember a funny example of this given by my coach when I was ten years old.

I’d just screwed up a tournament and when it was over we were analyzing my games.

I showed him the first game that I’d lost. At the end, my coach asked, “What do you think, why did you lose the game?”

Naturally, I gave him the most common answer – “I blundered ?”

He said, “Okay…show me the second game.”

At the end of that game, I made a stupid mistake and lost. Once again he asked me, “Why did you lose?”

This time, I gave the second commonly used answer – “I was in time trouble.”

Then he asked me the best question! ?

“Avetik, imagine there’s a car accident where the police officer at the scene asks the driver why it happened, and he answers “Because I was drunk”. Whose fault is it that he was drunk?”

If you’re an amateur and these are the answers you usually give, don’t be disappointed. Most professionals and even Grandmasters have these 2 common excuses in their arsenal ?

But only the best players are able to give answers that show true self-awareness of their defeats.

One last thing. Sometimes you might not be able to work out where you screwed up, but a friend or chess coach might be able to give you the objective answer.

You shouldn’t necessarily listen to everyone. But if someone’s more experienced than you, at least listen to them and then decide if they’re right or not.

I’m always honest with my opinions to my students when they screw up a game, their training, or their homework.

If we’ve only recently started working together then most of them take it as criticism and attack. But with time they understand that it’s two of us working out the situation and searching for solutions together that will help them grow.

Be honest with yourself, acknowledge your issues, work out the core reasons behind them, and be open to objective feedback. Best of luck!

P. S. This article was already written when I interviewed GM  Ivan Sokolov, after they won the 44th Chess Olympiad.

When I asked him what’s his advice to chess improvers, do you know what he said the first thing? You guessed it. “Stay objective!”

P. P. S. Be courageous, take the first step and admit the issues you have. You can share them and your thoughts too in our forum.