Over 500 points in 1 year - The adult chess improver looking to do the improbable!

Progress happens when we test old beliefs and break records.

Jay Garrison, an adult chess improver in his late 40s, is determined to shatter one such belief and inspire a change.

Challenging the status quo as an adult chess improver

Naturally, when one has big goals, they’re likely to face skeptics. Things look impossible when something hasn’t been done before. But Jay believes it’s essential to try and challenge the existing set of beliefs.

“I get people saying good luck, it’s probably never going to happen, but you can try. But that doesn’t bother me.

We won’t know if we don’t try. There’s too small a sample size. Not many people have tried, so we don’t know if one can do it.

With a clear WHY, Jay knew where to direct the energy. Now he had to focus on building a strong foundation. So he started by creating his own pgn files from the opening courses. Even if it was a time-consuming process, it gave a massive payoff and still continues to help him.

“It took me 6 months to build the files. And now, every time I play a game, I check to see if there’s a new move and add it to the file.

And if I make a wrong move, I’m immediately able to know where I went wrong. If I make a mistake once or twice, I’m not going to make a mistake again because it’s reinforced in my head that’s the wrong move and what’s the right way to play instead.”

Discovering an opening he loves!

In one opening, Jay started to enjoy impressive results. From his practice, he noticed that many players below the 2200 level found it too challenging to face this opening with Black.

“I love the Scotch Game. I have a 78% score in the Scotch and haven’t lost a game against anyone below 2200 in this line. Most players at this level just don’t know how to defend against this line. The attack on the Kingside is so fast and so strong that if they’re not good at defending, they just crumble.”

Bolstering opening preparation with the classics

“Another reason why I’m so comfortable in the opening is that I’ve watched many chess classics. So even if someone plays something out of the opening, I can trap them. This game shows exactly that! White breaks the opening principles with 5.c3 and pays the price for it."

As a result, openings went on to become Jay’s biggest strength. When he looked at his data, he found out that 97% of his wins resulted from a superior opening preparation.

Studying classics is fun for him. At the same time, it allows him to learn new strategies that he can execute in his games.

“One of the ideas that I’ve been able to implement many times in my games is the one where you isolate the piece, just like the Winter-Capablanca game.”

The Bg3 is out of play. Capablanca masterfully converts his advantage from here

The difference between old classics and modern games

Older classics, where the stronger players get to execute their original ideas are pure gold.

“If you watch games like Carlsen vs Caruana, there’s so much stuff you just don’t see because these players can counter each other’s ideas before they happen on the board. They seldom blunder that it allows one player to reveal their whole plan.

But if you go watch the games of Capablanca or Tal, you get to see their whole plan coming to fruition against weaker players.”

Working with a coach you trust

Many times we’re asked if it’s okay to work with a coach after joining ChessMood. In Jay’s case, this combination worked extremely well for him.

In 2021, he started to work with GM Rogilio Barcenil Jr. who not only lived closer to him but was also one of his friends.

“He lives only 20 miles from my place. We played many tournaments together and struck up a friendship. In fact, Rogilio was the first GM I played against.

A magic word that helped him improve his game

Aside from learning new information, being aware of your weaknesses is important too. So while reviewing his games with GM Rogelio, there was one thing that Jay always did.

“Most of the time, we go over the classical games I’ve played in tournaments. And I’m always taking notes. And in the notes, there was one word that stood out the most.

While reviewing my notes, 6-7 words kept repeating themselves. One that repeated itself the most was patterns.

Two pieces standing on the same color? That means there could be a pattern for a Knight fork!” 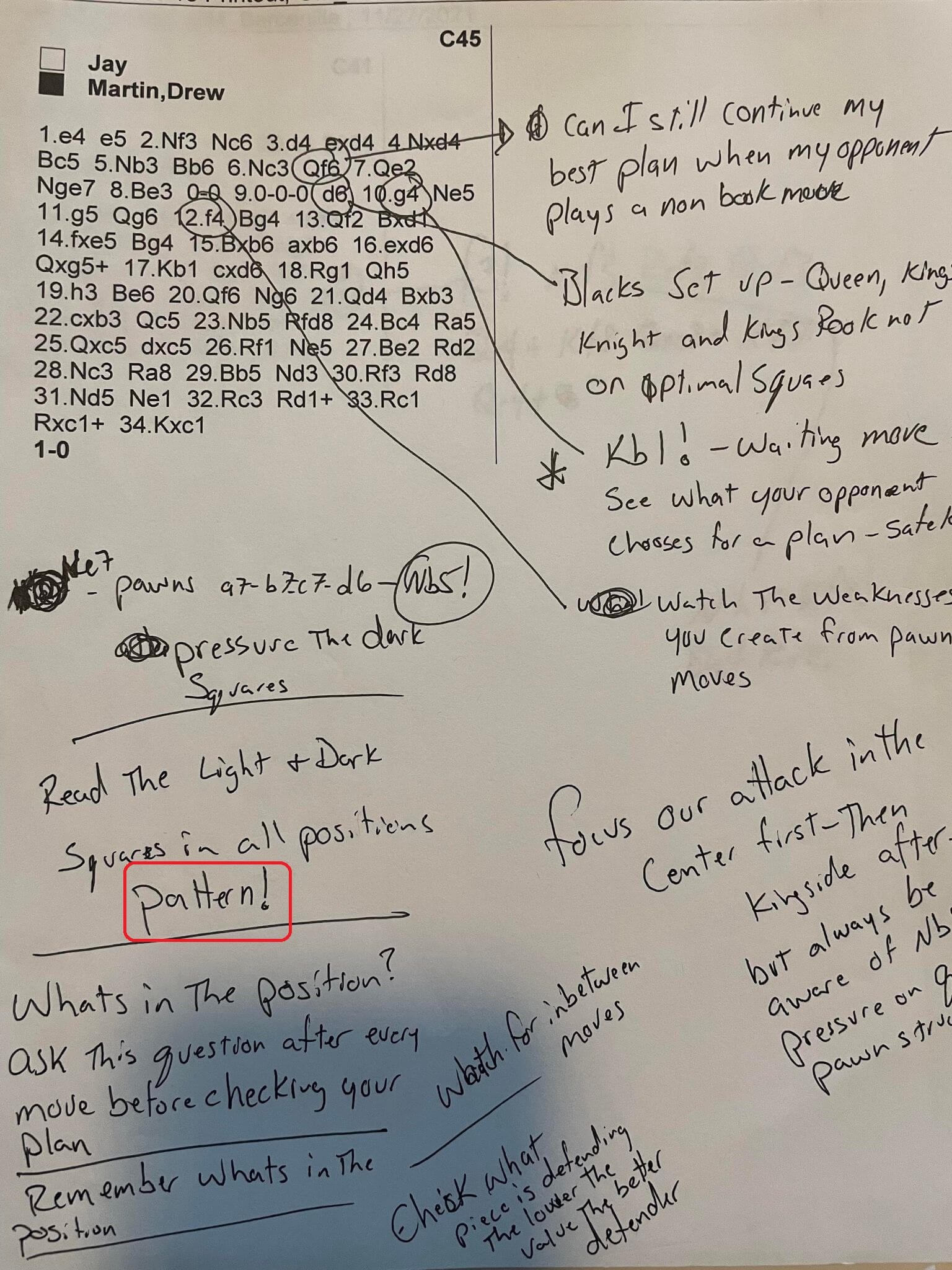 Preventing burnout and keeping the fire of excitement alive!

From the above notes, one can see Jay’s passion for the game. No wonder, he surrounds himself with chess even when he’s relaxing. So how does he strike a balance between serious practice and rest?

“I usually spend 3-4 hours as serious training work. When I go 3 hours straight, I get mentally tired. Then I need to do something to relax. So instead of playing video games or watching TV, I watch a Youtube video on chess.

In this way, I don’t burn out. This allows me to wake up with a sense of excitement to start practicing chess!”

His secret to keeping the right mood during a game.

Training is one part of the equation. In the end, you need to make good moves when it matters the most. For that, it’s essential to stay calm and keep the right mood during a game. Jay believes in it, and who would’ve known – he even has a special ring just for that purpose.

“I wear a fidget ring on my finger during a game. It reminds me to keep the right mood and focus only on my game. There are many moments when our mind starts to wander. I roll my fingers over the ring when that happens, which anchors me back to the present moment.”

The impact on Jay’s game

The openings, the classics, the ‘patterns’ and keeping the right mood had a big effect on Jay’s chess.

By seeing his progress, one can figure out that Jay has come a long way. But it doesn’t end here. Jay knows that he’ll need to play many games and keep improving to reach his ambitious goal.

“It takes around 6-8 weeks of work to budget for a tournament. Plus, I play a game every week at my local chess club. So in total, I’ll play around 120-150 classical games this year. As my rating gets higher, I’ll go for norm tournaments.”

Rapid Round with Jay

In the end, we also asked Jay some rapid-fire questions to get to know him better. He reveals his favorite player, advice to improve fast and which chess superpower he’d love to have!

How would you describe yourself as a player?

“Somewhere between Alekhine and Tal!”

“I’ll throw everything at you, literally everything! If I can’t checkmate you, then I’m going to pick a piece and have a go!???”

One thing about ChessMood that’s helped you the most.

If you get down on yourself in the middle of the game, you aren’t going to find good moves.”

“The Scotch game. I also like the course on classical games. I remember when there were 5-10 in there and he(Avetik) was still building it out. So everytime it came out, I watched it.”

One piece of advice to those who want to increase their rating fast.

You don’t win chess games from the openings, especially against strong opponents. You may have a big opening advantage, would equalize with Black, but you still have to play chess at the end of the day to win.”

One advice to somebody who has limited time to study chess.

“If you have limited time, study stuff that you enjoy. Don’t expect results tomorrow. You might not see the results right away. You just got to get 1% better every day. Trust the process.”

If Goddess Caissa were to grant you one chess superpower, what would that be?

“The power of extreme and accurate calculation. The best players in the world are those who can calculate well.”

Thank you for reading!

You can share your questions, congratulate Jay and connect with him via this forum link.