How to Inspire Your Chess Student

Advice like 'Do your best', 'Focus', etc might work. But there's a more effective way to inspire your students. Learn about it in this article!

“What you do has a far greater impact than what you say.”
Stephen Covey

To succeed, we’ll often find ourselves needing inspiration – whether in chess or life. We might watch a motivational video, talk to someone, meditate...

However, sometimes it won’t be ourselves we need to inspire but other people.

It could be our student, kid, or friend, before a game, before a tournament, or before a big moment in their lives.

...which all sound good. But is there a better way to inspire someone to victory?

Recently, one of my students, Prin, who’s also one of our youngest members, faced a Grandmaster in the first round of a tournament he was participating in.

It was the first Grandmaster that he’d ever competitively played against, and he was going to be playing with the Black pieces.

A 2,125 rated player with the Black pieces against Grandmaster Megaranto Susanto, who was the #1 Indonesian player for a long time.

The odds were definitely stacked against him!

Before continuing to read the article, imagine that you’re his coach and you’ve got 10 minutes to inspire him before his game.

Have you come up with some options?
Okay. Recently I posted this question on the ChessMood Facebook group. 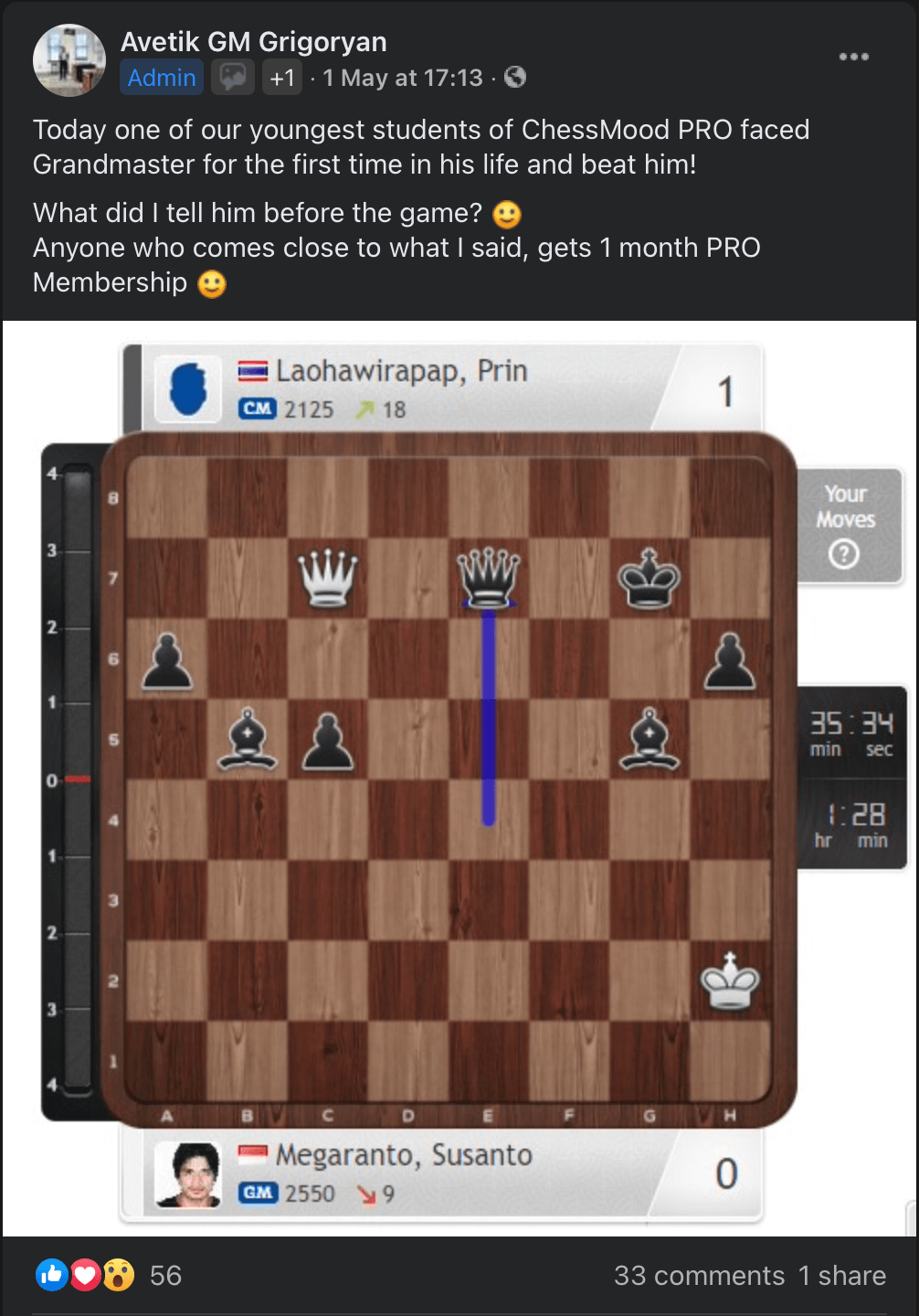 Here are the main types of answers I got:
“Enjoy the game, you have nothing to lose”
“Don’t be afraid”
“Focus on the pieces and the board, forget who you’re playing”
“Right Mood – Right Move”  (the ChessMood slogan)

Was yours similar to this?

A few years ago, when I didn’t know much about neuroscience and how our mind works I would have said something similar.
But after learning from some of the best sports psychologists, I’m going to share a technique that’s much more effective at inspiring others.

The key to inspiring others

When you’re looking to inspire someone, the first and most important thing you want to do is help them believe!
As we mentioned in our article about the power of self-belief:

The question is, how can you make them believe in themselves?
Saying, “You can do it,” or “I believe in you,” might help.
But there’s a better technique, and here’s the essence of it:

It’s easier to believe in something seemingly impossible when it’s been done by someone else earlier.

A classic example of this is the four-minute mile.

It was believed that the human body wasn’t designed to run a mile under 4 minutes for many years. The so-called ‘experts’ only reinforced this belief, creating a large mental barrier to achieving it.

However, there was one man who refused to accept it as reality. He was different.

He brainwashed himself into believing that running a mile under four minutes was possible.

And eventually, on May 6, 1954, Roger Bannister’s conviction turned into reality. He shocked the world by running a mile in under 4 minutes.

That day not only changed his life but also created a permanent shift in what people perceived the human body was capable of.

One year on, many other sprinters were able to run a mile in under 4 minutes. In fact, today, even top high-school athletes can run a 4-minute mile…

So what did I say to my student who had the unenviable task of playing against and defeating a Grandmaster?

I remembered the following quote:
“The most powerful leadership tool you have is your own personal example.” – John Wooden

And then I recalled the first time the same thing happened to me. I was 15 years old, just one year older than my student when I played against a Grandmaster for the first time in my life.

What’s more, I also had to play with the black pieces!
My opponent at the time was an experienced Grandmaster from Russia, Iskusnykh Sergei.

During the game, I decided to play very aggressively in the opening. I launched an attack, but after 20 moves he’d almost neutralized it. I knew I had to do something...

My opponent’s light squares were very weak. Also, my Bishop on h5 was helping me to fight for the open line on the “d” file.
After 23.Ba3 c5 24.Kg1 Nb8! I was going to enter my opponent's camp.

He couldn’t stop me, and I won my first game ever against a GM.
At this point I believe, you know the message I sent to my student before his game...

Following my instructions, Prin went for a very aggressive opening – the Modernized Modern Benoni. He had great preparation with many novelties, thanks to my friend FM Nicolo Pasini (one of our earliest students).

In the middlegame, Prin took the initiative, and here it was his turn:

He sacrificed an exchange, ruined his opponent’s King’s position, and after 30.gxf4 Bc3 White had serious issues.

The e1 Rook hangs, as does the a5 pawn, the defender of the b6 Knight which is trapped in the queenside.
Prin went on to accurately convert the advantage into a win.

For me the most fascinating part of this story was that:

Was it a coincidence?

I would have thought so before I entered the deep world of neuropsychology.

As a parent or coach, do you need to learn neuropsychology to help and inspire your son/daughter/student?

It would be beneficial, but if you don’t have much time, here’s my advice:

Whenever you want to inspire someone, and you don’t know what to do or say, think about how you can make them believe in it.

If you can show them that someone has done it already – great!
If you can inspire them by using a personal experience – even better!

If I didn’t win my first game against GM, what would I have done?

I’d have probably researched the games of Bobby Fischer (my student’s hero) and referred to some games where he beat Grandmasters at a young age.

I would help him to believe that others have done it, so there’s no reason he can’t do it too!

Will it always work?

Our job is simply to help them unlock their full potential. That’s it. The rest, they should do themselves.

I hope you have the same feeling I had with whoever you’re supporting and inspiring.

If you’re working hard to improve your own chess, go ahead and achieve what you’re dreaming about. And if you’re busy helping others, make them believe in themselves.

P.S. You can share your thoughts about this article and any similar stories you have in our forum.