GM Vishnu Prasanna is a man of deep insights and wisdom. He has worked with many top Indian chess players.

One of the students whom he nurtured from a young age is GM Gukesh, who’s currently one of the strongest juniors in the world.

In conversation with GM Avetik, Vishnu shared many rich insights around chess improvement, revealed some lesser-known qualities that make Gukesh the player he is today, the biggest challenge most adult improvers face, his perspective-shifting experience as a second at a super-GM tournament, and more.

To save you time, we’ve extracted the most wisdom-packed advice and interesting stories in the article. And at the end of it, you can watch the full interview.

While his pupil became a GM at 12, Vishnu had a very different beginning.

“It was my mother who introduced me to chess when I was around 12. I was playing a lot of cricket but we moved to a different part of Chennai, and then I started playing chess. Times were different back then. There were no 12-year-old GMs at that time.”

But there was a legend who also came from the same city.

The legend who inspired a nation

“Viswanathan Anand had won the World Cup in 2000. I didn't really know what was going on. But that victory inspired my mother. She decided – taking up chess is a good direction.” 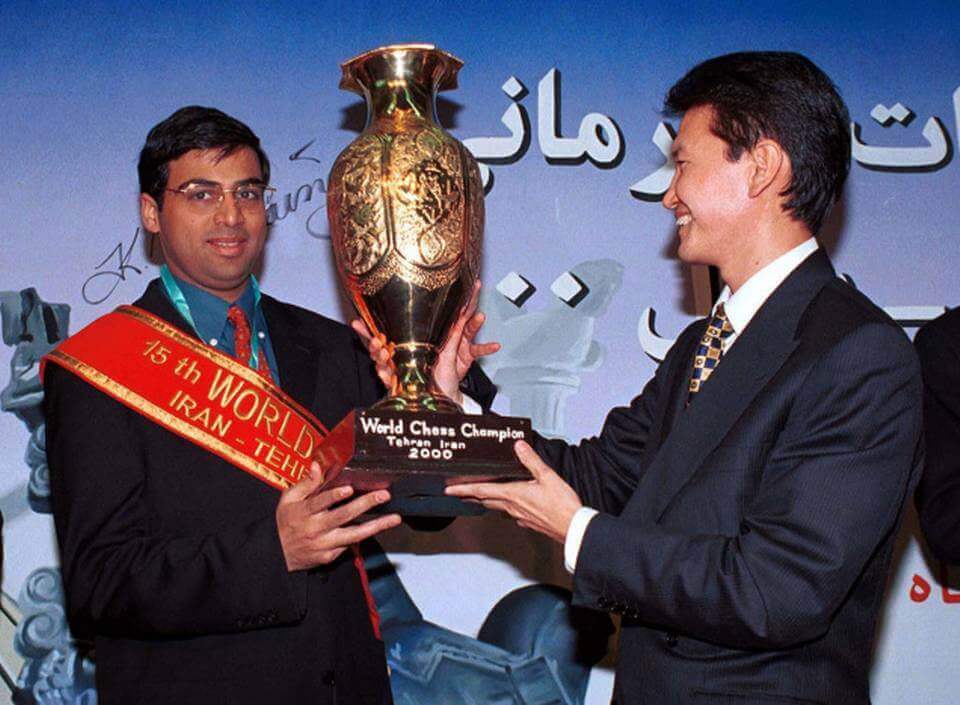 “He(Anand) has been the main source of inspiration for Indians for many decades. I met him after becoming a GM, and my respect for him grew much more after that. It's just how simple and unassuming he is in spite of all he is done.”

How Vishnu became a GM despite starting late at 12

So what was his approach to the game?

“I was obsessed and curious about chess. It's very hard to play chess if you're not very interested in it. Also, I had a certain naivety at that time. People constantly told me I was late and all that, but I never thought about those things when trying to become a Grandmaster.”

However, after achieving the GM title, it wasn’t clear how he could grow further.

“I tried a lot of things, but nothing really worked for me. I was stagnant and had to support myself in some way.”

“So I started to coach beginners. Then a 2200 player approached me, asking me to teach. And when I taught him, he became an IM in like 6-8 months or so.”

That was one of the first successes Vishnu had in coaching. There were more to come. But he was about to undergo a transformation.

“At 27, my perspective of chess changed.”

The super-tournament that made Vishnu rethink chess

It started when GM Adhiban invited Vishnu to be his second at the Wijk Ann Zee 2017 tournament.

“We had the same coach as a kid, Mr. Visweswaran from Chennai. We had worked before and also were good friends. So that’s why Adhiban invited me.”

Adhiban’s opening choices at that event surprised everyone.

“When I went with Adhiban to Wijk Ann Zee, I was seconding him there. I made him play King’s Gambit against Wesley So, Scandinavian against Magnus :D :D”

Adhiban drew his both games. And his final tournament standing gave Vishnu many things to think about. 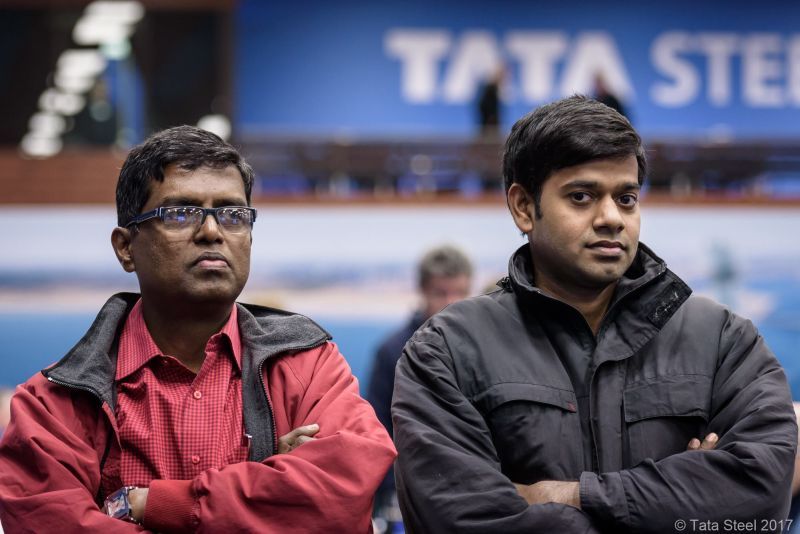 “3-4 months after the Wijk Ann Zee tournament with Adhiban, I met my mentor, Mr. Srikanth. He's around 2100 rated player. But he quit competitive chess two decades ago. He's really into psychology. He has a huge library and buying books is his obsession. But he never reads them. That's a joke we have. :D :D”

“He introduced me to a lot of thought processes and philosophies. He made me think.”

With this, Vishnu began to probe his old belief.

“I'm thinking like if he(Adhiban) is having such good results with bad openings, then maybe good openings are not the solution.”

The key is understanding the positions and arising middlegame… But unfortunately too many are obsessed with getting a +0.2 advantage instead of understanding the arising positions… As Vishnu pointed out in the interview too – it’s a very wrong approach.

Srikanth showed Vishnu the importance of keeping a beginner’s mind and not being afraid to question existing beliefs.

3 months after meeting his mentor, it was time for him to mentor a talented young protege.

From the beginning, it was clear that Gukesh was a hard-working player.

“He doesn't need babysitting. If there's something in a book, he'll read the book. He reads and studies a lot of chess on his own.”

Together, they covered many things in chess. One thing they did a lot in their training was the ability to make better practical decisions.

“We’re always looking at games of everybody but only from the sphere of decision-making. It’s more like let’s look at how Petrosian approaches the game, how he makes a decision.”

It shouldn’t come as a surprise that Gukesh spends a lot of time studying chess.

“He plays a lot, rests a lot and a typical workday is around 10 hours.”

Vishnu had more to add.

“You learn a lot when you don't have a goal. When you're training or playing, you have something specific in mind. When you're just thinking about the game, it's very abstract and will take you to some interesting places.”

This is quite similar to how the human body gains muscle strength. While a good diet and working out in the gym helps, the body builds muscles and makes new neuron connections when one is asleep.

The most difficult part for adult chess improvers

“Without that thinking part, improvement is very hard. That's why it’s the most difficult part for adults, even with dedicated training time. It's hard for them to find the time to think about chess.”

An underrated quality that Gukesh has, but most don’t.

Gukesh had talent and a work ethic. But there’s one quality that many often overlook in his chess growth.

“He has absolute trust. It's not a quality that everybody has. He starts with trust and if it isn’t working, then he questions things. From the beginning, he was like listening to me intently.”

“What I expect from the student is to be completely honest, show weakness, and be vulnerable with me. Without being that connected, it’s hard to teach somebody.”

How staying away from the engine made Gukesh stronger

Gukesh put his complete trust in Vishnu’s coaching methods. One of the things Vishnu suggested was not to use an engine.

“It was just an experiment. Except for Gukesh, nobody before or after Covid has accepted that. People when they come to me know that I recommend that, but they don't want to do that anyway.”

“You get a better sense of practical play when you turn off the engine. The number of bad positions Gukesh has saved, how he provokes his opponent and all that – there's a deeper layer to it. It's not really obvious when you use engines.”

As a player, Vishnu had come across a chess coach who was against using the engine.

“Mr. Ivan Sokolov used to fight the engines ruthlessly. I was an engine addict as a player. So I would be checking with the engine and he(Sokolov) was using his head ruthlessly and trying to fight with us :D A lot of practical play is part of Ivan Sokolov’s training. He understands what works practically.”

Why questions are more important than answers

So how does the engine limit one's growth? Vishnu had a deep point to share.

“I used to joke with my friend there's only one problem in chess and that is what’s my next move. If you know that, then stop thinking and make the move. If you don't know, that's something you have to think about – Why can't I make a move here if I've studied so much chess for so many years?”

“In chess, it's very difficult to make a move that’s not worsening your position for a long time. Why is that? You have to think about such things. You get a lot more questions to think about when you turn off the engines.”

“Questions are more important than the answers. The engine gives you the answers, but it doesn't give you the questions.”

“So in that sense, a lot of human chess and human behavior, you understand without an engine when you think. So in that way, I think that was also an important reason why I recommended that.”

“You probably shouldn't use engines till you're 2200. I would say that engine use is definitely detrimental if you don't know why something is a mistake.”

Being open-minded as a coach

In one of the previous interviews, Vishnu made an interesting point.

“My belief is that the student is always a little bit smarter.”

He then shared a moment when he had to trust his protege and keep a beginner’s mind as a chess coach.

“We had only two minutes to talk, but he was very firm in his belief. I thought it was completely absurd. You don't have an engine. Your opponent is a classical player who's played 1.e4 e5 all his life. And you want to play a suspicious gambit against him.”

“It was completely against my beliefs, but I said okay. Later he won the game quite convincingly. But eventually, we both agreed not to repeat that again.”

“Sometimes, your student is smarter and your own beliefs are against you.”

The art of staying humble

While Gukesh’s rise has been phenomenal, his feet are still placed firmly on the ground.

“There's no reason for Gukesh to trust me after becoming 2650, 2700. But he still comes to me and has absolute trust in whatever I say.”

“A lot of Gukesh’s humility comes from his upbringing. His parents have been great influences. So in this regard, I think the praise goes to them.”

“I constantly show people who have achieved tremendous things in life. And they see that they're so humble. We discuss that we haven't done anything yet. We haven't made any achievements in any sort of way yet. So there's a long way to go.”

“My advice would be to trust the child, trust the coach and see how the process goes. You have to give the process some time because chess improvement takes time.”

“There can be many coaches. You'll have to find the right coach for your child. Because there should be a personal relationship between the child and the coach.”

Using an engine as a parent isn’t effective either.

“I see a lot of parents that say ‘Engine suggested this so why didn’t you do that?’ even when the kid is 1200. They are yelling at them. Parents shouldn’t assume that they understand chess if they're not competitive players. Neither engines nor books or courses will teach you about competitive play.”

3 pieces of advice for anyone wanting to improve their chess

To discover more about Vishnu’s deep thoughts, his view on chess improvement, watch the full interview below.

Share your thoughts with us under this forum thread.