+600 rating points and a visit to ChessMood

Mik Bernicchi raised around 600 rating points, attended the wedding of one the ChessMood team members and was with us at our office. Discover his story here. 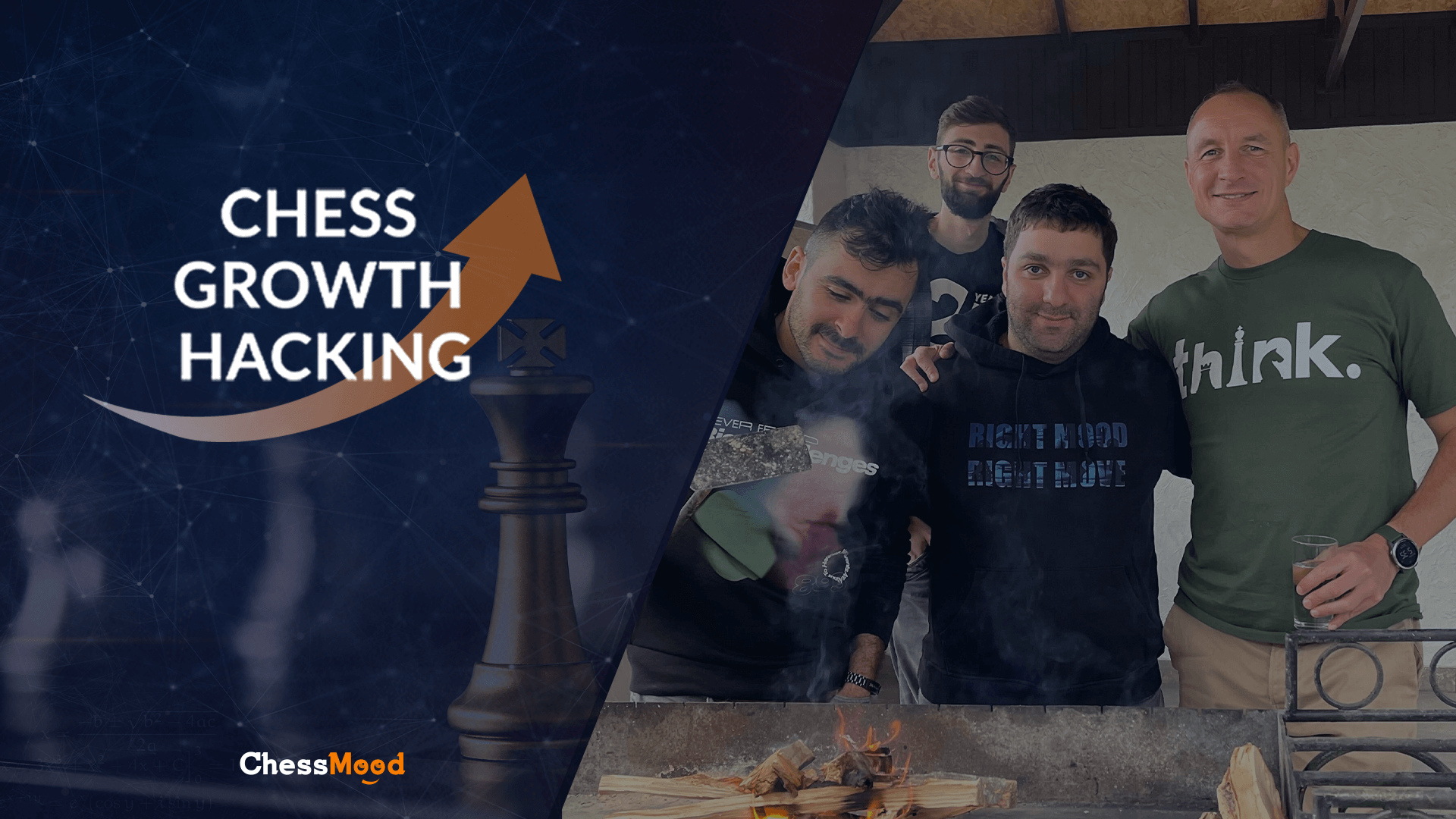 Chess is more than just a sport.

And there’s one perspective of chess that’s easy to undervalue – the power of the game to connect people.

For Mik Bernicchi, a software implementer, chess was the bridge that would take him on an exciting journey across a continent to attend GM Gabuzyan’s wedding, meet our team at the office and explore a new place!

He learned about the game in his childhood from his father.

“I was born and raised in South Africa. But I now live in the UK, just outside of London. I learned chess I guess like most people from my dad when I was very young; never had a coach or anything. About the age of 9, I just stopped playing chess completely.”

Mik had lost touch with chess. He started following the game again after an English legend was competing for the highest title.

“The thing that got me back into watching chess was when Nigel Short challenged Kasparov in 1993. Later there was the Kasparov vs Deep Blue match. Since then, I'd just follow the World Championships.”

“I never played or trained. Learning chess was more of a hobby, like an outlet.”

“I decided to take it a bit more seriously and actually see what I could achieve.”

“I came across ChessMood through one of the chess forums. The Right Mood - Right Move approach really struck a bell with me and also, the ethos of Avetik and how he wants to share his knowledge with everyone.”

With that, Mik became one of our earliest students in November 2019!

The importance of being honest with his approach

From the very beginning, Mik was clear about his approach to the game.

“For me, chess was always a hobby, something fun to do. But if you want to take it a bit more seriously, you have to apply yourself, and still try and keep that element of being a hobby. Because that's what it is. I didn't want it to become work mode. I'm not a professional chess player. I'm just happy to play solid, concise, and attacking chess.”

Being honest meant Mik was aware of the drawbacks of his old methods.

“A lot of the stuff I knew was me reading books, watching YouTube, online courses, but there was no structured plan or anything.”

“I would get a book, learn say b6 opening, and I'd do that for two weeks. Then I'd find another book with d6 opening. I just enjoyed chess so much that I wanted to learn as much as possible. But it wasn't really helping me.”

So he had to put in the work to lay a foundation while keeping the fun element.

“I went through all the step-by-step courses for White and Black side, and that was probably one of the biggest learning curves because I never played the same opening.”

“Before I didn't have an opening repertoire. So having one was the first big win because now I can get out of the opening. When I haven't lost, I'll be in a good position or where I'd almost have a little bit of an advantage.”

Soon, Mik also began to work with Avetik – a move that helped him further build a solid chess foundation.

“We worked for three months, which was phenomenal in terms of giving me the structure.”

Mik was facing a problem that many chess players often face.

“In our one-to-one lessons, my understanding was at a higher level than what I was actually playing.”

It basically means in 1-1 coaching sessions, Mik would often find the best moves in a position. But during a real game, he couldn’t find such moves. There was something holding back his performance.

“So Avetik had me record myself while I was playing a match. Then I played it back to myself and sent it to Avetik. It was a little bit embarrassing in terms of how you talk when you’re in a bad mood. I wouldn't even talk to my own kids or anyone that way, but I was talking to myself like that. It was the first big eye-opener.”

Mik had to work on his biggest weakness – tilting. To add to this, he shared an interesting concept of how one’s mood affects their performance.

The Bell curve – How mood affects the game

“Ideally, you always want to be playing your A game (your best). Normally, you play around your solid game. And when tilting and playing badly, you play somewhere below -1, -2.”

“For me, the two biggest challenges I've ever had was ignoring my weaknesses because I always enjoyed learning something new like everyone else.”

“So if you learn something new, your bell curve gets wider. This also means your bottom end never moves because you're not dealing with your weaknesses.”

This made Mik realize the importance of having the right mindset and covering his weaknesses.

The collaboration with Avetik was useful. However, work and other circumstances would take priority, making it difficult to continue focussing on chess.

A moment that shaped the future – Working with GM Gabuzyan

When Mik reached out again for a one-on-one lesson, things were different. Avetik was very busy with ChessMood, so he referred Mik to Gabuzyan. Little did Mik know how this moment was going to shape the future.

“I started working with Gabuzyan. Obviously, in the 1-1 classes, they concentrate on my skills and improving my skill sets. But the way he teaches in the 1-1 classes is exactly the same way he talks in his webinars, the same messages he gives out including all the catchphrases.”

“Seeing Gabuzyan and Avetik, both of them on the webinars, that's who they are, and that's how they teach in their private lessons.”

The most important thing for Mik during a stream

“When they do their Racing streams, like the below 1500, 1500 - 2000 ones, I always watch it more than once because there's always soundbites or catchphrases or things that they tell you.”

“There are always elements in their play when they're talking aloud that they always will tell me in my individual lessons. It’s as close to getting a 1-1 lesson for anyone who doesn't have them as a coach.”

Despite managing work and having little time, Mik raised around 600 points in both Rapid and Blitz.

Mik also had another goal in mind.

“I always wanted to play in an over-the-board tournament just for fun, to see what it's like. I've never done that.”

That opportunity came in 2022.

“In 2021, I considered participating in the ChessMood Open but couldn't. In 2022, I was in a position where I wanted to come out and play.”

While discussing this option with his coach, something interesting happened.

It looked like a perfect adventure – flying 3000 miles to play your first OTB tournament in a chess-loving country, attending a wedding, and exploring a new culture with the locals.

“I had started a new job in June, so taking three weeks out was a bit difficult.”

This meant Mik had to make a few adjustments to the plan.

“I couldn't go to the ChessMood Open, but I decided to attend Gabuzyan’s wedding, look at the ChessMood headquarters, and meet everyone face to face. You get to see one or two people on stream now and again, like Lily and Edvin, but you don't get to see others in the background.”

With that began Mik’s journey.

On arriving at the Yerevan airport, he was greeted by none other than his coach, Gabuzyan, who picked him up from the airport at 4 in the morning!

“The first day, we looked at a lot of the capital(Yerevan). I spent a lot of time just looking at all the sites, the main shopping areas, wandering around the streets, seeing all the people, and just soaking up the atmosphere. It was interesting to be somewhere new and different. On one of the other days, Gabuzyan took me out of the city center. We went up the mountains to see the Temple of Garni(built during the 1st century).”

He also met other chess pros present at the wedding.

“I also got to meet the Armenian National Team, one of the strongest in the world. I had a chat with some of the players too.”

The chess players at the wedding | How many are ChessMood team members?

When it was time to dance, things got a little too exciting for Mik, especially since some of our team members were already down a few glasses. In the end, everyone kept their balance, and it was all great fun!

A day before the wedding, Mik was with us at the office, where we had some fun activities.

“It was very nice in terms of putting on a barbecue. You all like table tennis. All of you are very good at it, although I did beat Gabuzyan, so I was quite proud of that 😄😄”

Mik and Avetik vs David and Gabuzyan | Guess who won?

“We relaxed afterward around the fire, chatting, having a few drinks and eating nice food. It was very nice to be welcomed.”

Thoughts on the ChessMood team

“The team's not massive. But the quality of what they give out is really good. They're all friendly and nice people to get on with.”

“When they knuckle down, they all work hard. At the same time, when they relax, they all have a nice time, which is good to see.”

“Working in that office space must be great fun. Everyone is still quite young. It's a vibrant atmosphere to be around. Avetik and a few others are quite jokers. Another one is Edvin, who comes across as quiet, but he's quite a character. Everyone’s a character with unique personalities.”

Edvin, our tech guy, always has some tricks.

Hosting Mik at the office was great fun. From table tennis to barbecue to Gabuzyan’s wedding, we share many memories. Next time, we hope Mik returns to Armenia for the next ChessMood Open and to settle the ‘unfinished’ squash game challenge against Avetik.

Future goal – The bet with Gabuzyan

Moving forward, Mik and Gabuzyan have challenged each other.

“October next year, we have goals we need to meet. Whoever wins gets to buy the other a bottle of whiskey or brandy. My goal is to get to 2000 rating on chess.com. He's made some big steps on his side, so I need to work quite hard.”

Who will buy a drink for the other in October 2023?

Before wrapping up, we had a Rapid Rapid fire round with Mik.

I do tactics. Warm up and then listen to some upbeat music.

What’s the favorite memory chess has given you?

Be honest with yourself.

How would you describe your experience of meeting ChessMood team?

Excellent. As I said, the whole group of people are very good as well as the whole ethos of like constant growth, well-being and happiness. There's a lot more to what you learn from them than just chess.

Always be in the Right Mood and play at the peak of my bell curve with unconscious competence.

For me, it's about the process. It's more fun.

Thank you for reading! Share your questions and wishes for Mik under this forum thread.