Why You Should Not Trust Chess Engines Blindly

A must-read article for anyone who uses or works with chess engines. 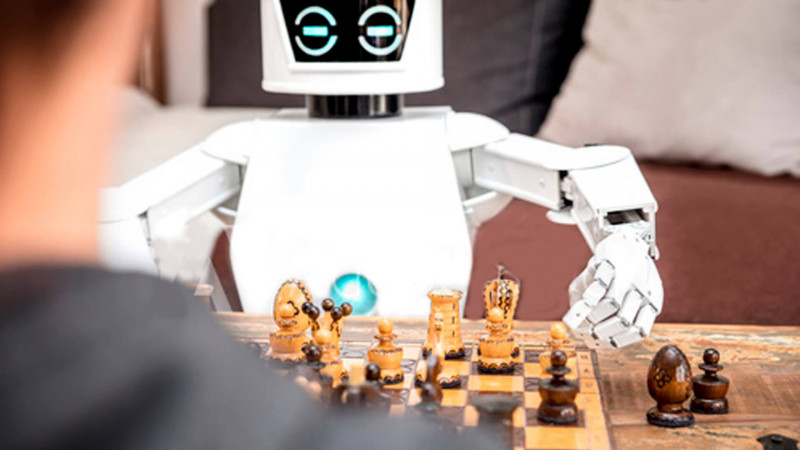 Hey guys!
I’m here to speak to you about a very important topic, which is not really acknowledged by many.

Nowadays we can enter almost any chess club and hear many youngsters saying “I know this position! Here the engine is giving +0.70!” or something along these lines. I have to admit that I was, and sometimes still am, one of these players.

Now, I’m, for sure, not going to disprove that engines are far more superior at playing chess than humans. Almost all the viable and competitive engines are miles ahead of players like Carlsen or Caruana.
BUT this doesn’t mean that engines are ALWAYS right. Actually there are many positions in which they go wrong, and sometimes even badly wrong.

I’ll bring two examples, which will show how the engine can “misevaluate the position.” 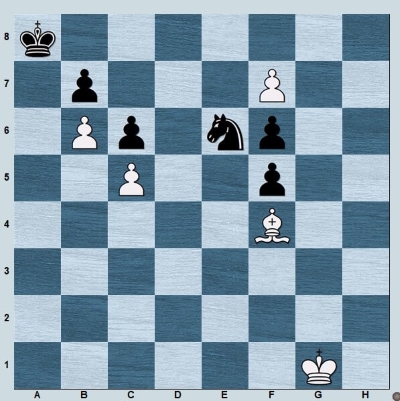 This study is created by composer Vlasenko.  We see an interesting endgame and that is, for sure, one of the main weaknesses of the engine.

Actually, engines can’t recognize a fortress. For those who might not know, a fortress is a position in which, despite having a material advantage (white, in our case), the player can’t win because the Black King is “in his fortress” with his pieces.
What does that mean? Let me show you. But at first, the engine evaluation:

It shows the same evaluation (around +5) for White’s all moves, considering Bh6 as the best one.

Now let’s calculate. After Bh6 Kb8 f8=Q Nxf8 Bxf8 White ends up with a Bishop for the two doubled Pawns on the “F” file, and he will be able to capture them easily with his King and Bishop. Yet, the position we reached is a dead draw.

In fact, after Bxf8, Black can easily play Kb8 and be sure that he will never lose. Why? It’s easy: he will never leave his fortress. In fact, considering that White only got his DARK SQUARE Bishop, he will never be able to promote his Pawns since Black will always keep his b7 Pawn protected just by playing Kb8-Ka8, and for White there is no way to chase away the Black King from his little shelter, since he would just end up stalemated in the a8 square.

Indeed, it would be pretty easy for White to reach this position, but he wouldn’t be able to make progress anymore.
Yet, even in this position, the engine is showing a +5 advantage!

So, is the initial position a dead draw? Well, not really. White can actually win, but with a line that the engine is evaluating the same as all the other drawish lines.
1.Bf4! is the winning move. 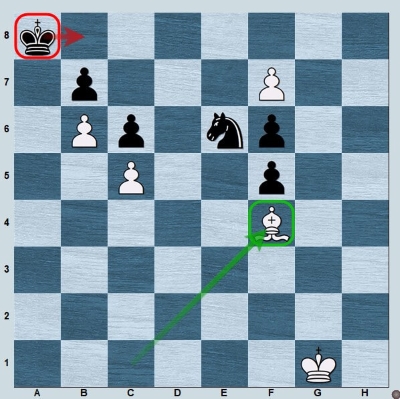 Now the Black King is cut off from the play and Black can only move his Knight.

Now, if Black plays 1...Nf8, the White King easily marches all the way to capture Black Pawns, as the Black’s King is left out from the fight, and then White wins because soon Black finds them in Zugzwang. However, after 1.Bf4, Black has a nice resource! Black plays 1...Nd8! 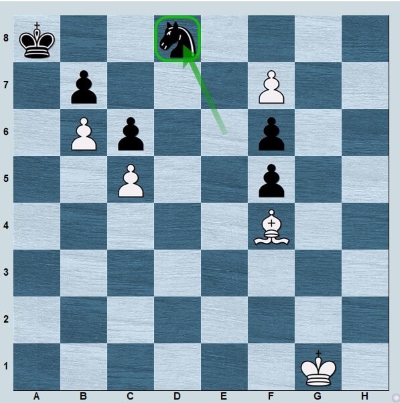 Now, if we promote to Queen or Rook, we will just end up with a stalemate!
If we promote to Bishop, it will be a dark-squared one, and we will end up with the same problem as in our first variation, but this time with 2x useless Bishops.
The winning move is 2. f8=N! 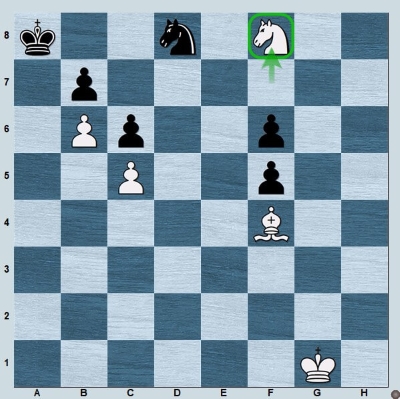 Black continues the fight for changing the Knights using the stalemate resource!

Now if Black takes 3...Nf4, after 4. Nf4 the position is not fortress anymore. Black should change the Knights, not the bishop. So they play 3...Nf8! and continue hunting for White Knight! 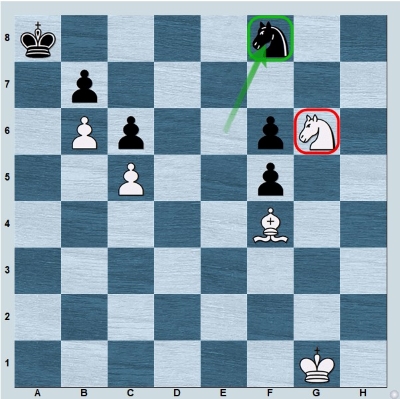 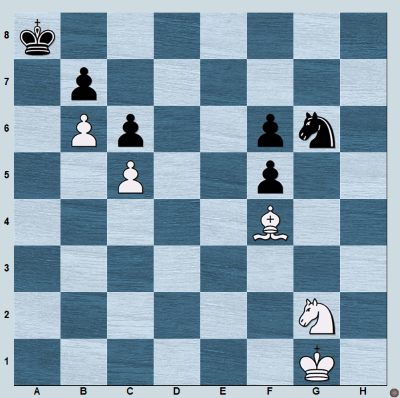 Does it look like that White is winning? Do not hurry! 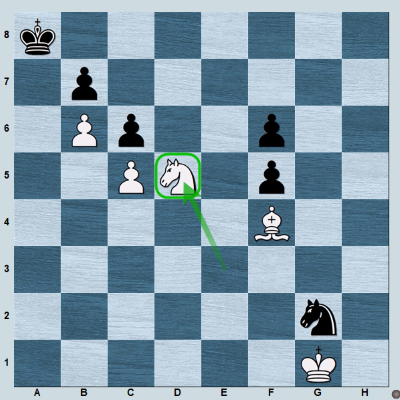 The hunting for White’s Knight is over, as after 7...Ne3 White will take the Knight with Bishop! (avoiding the stalemate).
If Black takes the d5 Knight playing 7...cd5, after 8.Kg2, the position is no longer a fortress, because after capturing d5,f5 and f6 Pawns, White will win with c6! 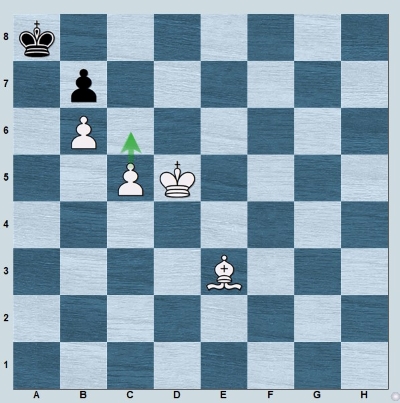 Now the most ridiculous thing.  The engine is not coming even close to the solution. Once again, I am not saying that engines are weak. The point of this article is that we can’t blindly believe what engines say.

This one was posted on a Facebook page by one of my Italian colleagues, a trainer and FM Maurizio Brancaleoni.

As we can see, White definitely has the upper hand: he has more active pieces, a safer King and some mate ideas. Black, for all of these, just has an extra Pawn in return.

The position was posted as a “White to move and win!” and the solution, as many “guessed” (aka: reported what their engine was giving) was 1. e5?!

Well, then why do I call it a dubious move?

Despite being the first choice of the engine, giving almost +1 advantage to White, e5 is very much flawed. Let’s together analyze the position after 1.e5. 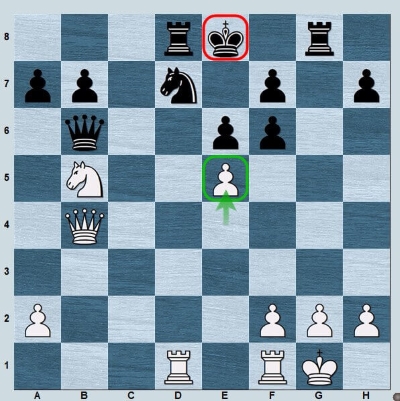 It’s probably true that the position after most of those moves is very dangerous for Black but here Black has a promising exchange sacrifice in the form of 1...Nxe5! 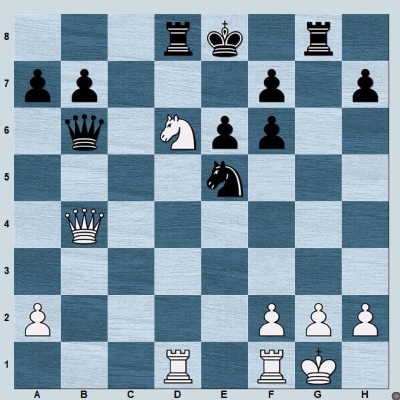 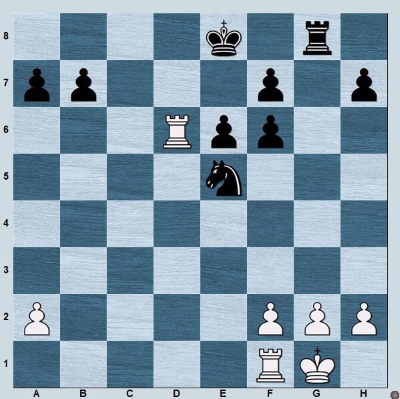 Now, as you can see in the diagram Black has a Knight and two Pawns for the exchange. Despite that, if White were to keep the Pawns on the Queenside he would probably still be winning since the Rooks are much better at playing in an open position with Pawns on both flanks.

So, how does Black fight against White in a superior position? By active piece play! 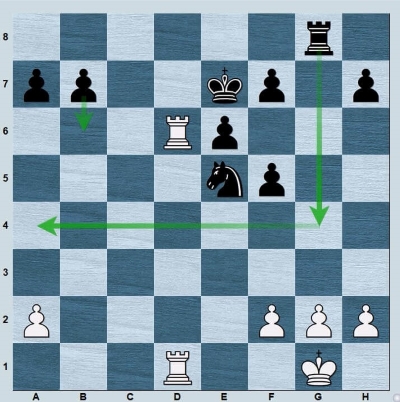 Now Black is fine with his strong d5 Knight protecting his queenside and making sure that white’s “a” Pawn is traded with black’s “b” Pawn.

Once that happens there are a few ways for black to achieve a fortress, but the most simple one is to put the Black King on f6, the Knight on g6, push the “h” Pawn to h5 and, if possible, trade it with white’s “h” Pawn (but it’s not needed). White doesn’t really have a good way to prevent all of that, thus we lead to a draw.

While this position is a draw, the initial position is definitely not “drawish.” White is, in fact, having some initiative as we discussed earlier. Despite not being the main suggestion of the engine, the move 1.a4! is definitely a better move, which keeps the advantage and asks some more questions to Black. 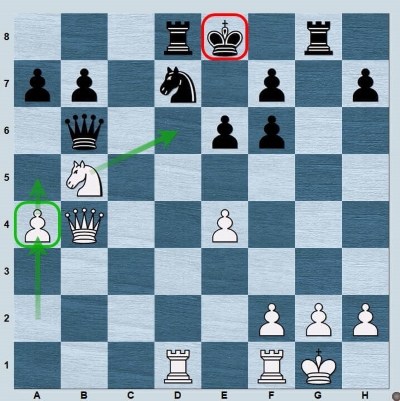 Over the horizon issue

I would call the problem the engine faces in the second position, “over the horizon” issue.

Engines, in fact, can analyze a position to a certain depth, but then they reach their “horizon”, a point after which it is almost impossible for them to analyze the position correctly and therefore evaluate correctly.

The fortress that we reach is very distant from our first move, maybe not in the sense of “how many moves were played until this point,” but more of “how many variations could have been played.”

In the final position of the 2nd example, after 9...Ne7, in fact, the engine gives “+0.86” to all those moves of White and Black that don’t lose material. A skilled player could easily understand, that this is a fortress and therefore stop analyzing the position after seeing that idea.

Those two problems of the engines are related one to the other: in fact, a fortress can’t be evaluated by the engine because he will keep playing the position for as long as he can, avoiding 3rd repetitions and 50 moves rule. That means that unless he reaches one of those two conditions he will just evaluate the position as “winning,” and therefore not giving the correct evaluation.

I hope that this article will give all of you a little bit more insight on why engines are not always right and why we shouldn’t blindly follow their advice: a true chess master uses the engine like a tool and is not “enslaved” by it.