How do some amateurs get free help from Grandmasters? Find out how being awesome could be the key to speeding up your chess growth! 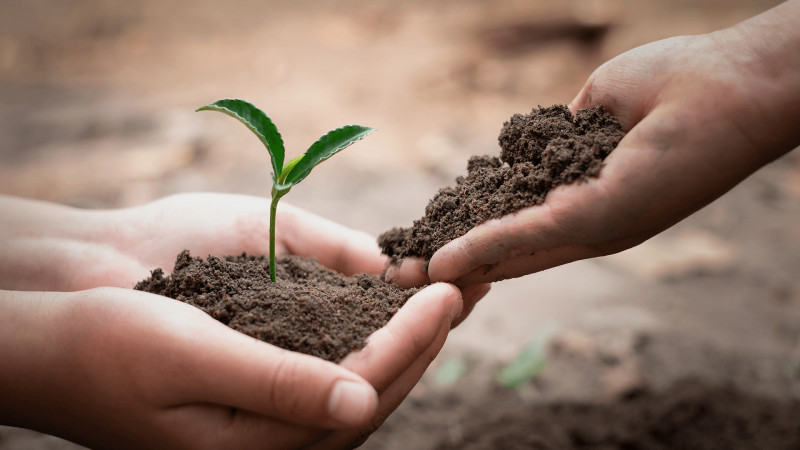 There are plenty of ways you could speed up your chess growth. You could invest in a high-quality course, find a sparring partner, or build a strong “why”.

But I’ve noticed there’s something simple that people often overlook. Something that you can easily do – regardless if you’re rich or poor, a beginner or a Grandmaster, in Africa or in America.

Let me put it like this. Have you ever noticed that…

• For some players, progress seems to come very fast and easy, while for others, everything is much slower and harder?

• Some players almost always get invited to the most elite chess tournaments, despite not being in the world’s top 10?

• Some amateurs get tuition and guidance from a Grandmaster…for free! Seems crazy, right?

• Some players become a Grandmaster at the age of 15 – is it just that they’re talented and hard-working? Or is there something else to it?

Are all these events unconnected? 🙂
Are they just coincidences? 🙂

Having been in the world of chess for more than 26 years, I’ve seen with my own eyes that there’s something deeper at play. Something that accelerates some players’ chess growth, much faster than others.

So what is this secret sauce? 🙂

It’s a simple mindset that anyone can apply.
Just be awesome.
That’s it.

Now you might say “C’mon… I came to your blog to read about something that will help me to raise my rating, and you tell me to be awesome? How is this related?”

Okay, stick with me, I have a few cool stories to share 🙂

In a previous article, I wrote about finding your but, I shared a story about how Kabir, a 12-year-old young man (he’s so smart and awesome, I can’t call him a kid) was so desperate to become a Grandmaster and what he did.

Anyway, after publishing the article, I went to the gym… I almost always keep my internet off, and after my workout when I turned on my phone to order a taxi, it went  “ting”, “ting”, “ting”... Messages and emails…

I was like “WTH? I was only gone for 2 hours.”
So I decided to briefly check what the hell was going on.

What I found was lots of messages like...
“Hey, I would be happy to pay for Kabir’s 1-year ChessMood membership”.
“Can I sponsor Kabir?”

Amazing right? But why did this happen to Kabir?
The answer is very simple. Kabir was awesome.

He was not just full of drive, but he was awesome. His message was awesome, the way he wrote was awesome. He inspired me to write that article, and then some awesome people offered their help. 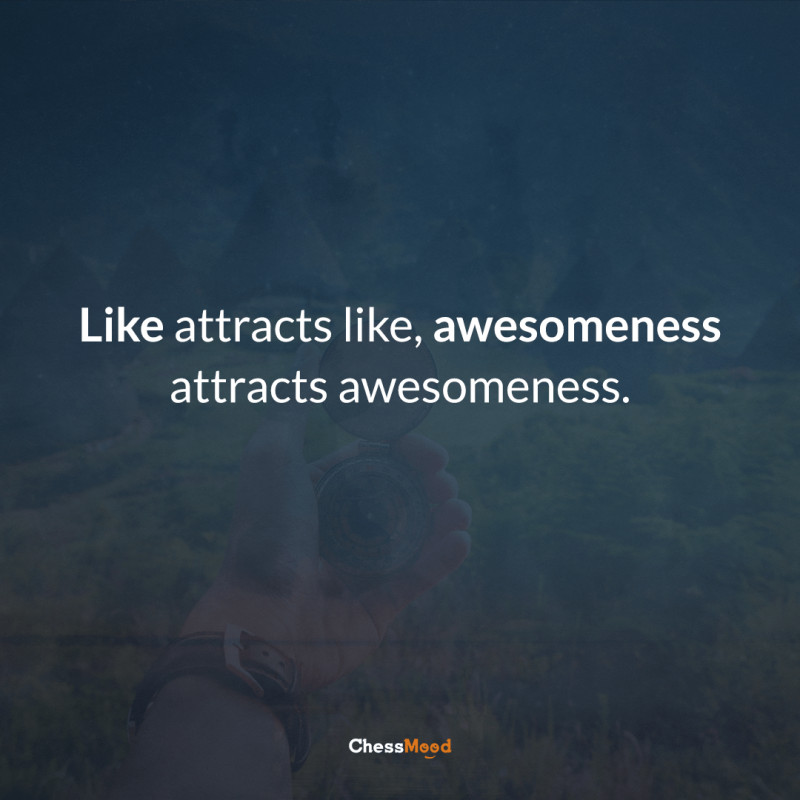 Recently one of my friends reached out to me and asked for my opinion about a guy who founded a new startup. My friend wanted to donate a very large amount of money because the startup was designed to help the economy of Armenia.

So he said, “Avetik, it seems this guy is trying to do something very nice, and he’s not doing it for money. I want to help him and be involved in this… But at the same time, I hear negative feedback about him. What do you think about him? Right now it’s 50-50 if I’ll do it.”

I didn’t know the guy very well. I had only held one conversation with him where he came across quite arrogantly and rudely. Of course, that wasn’t enough to make a conclusion about the man, but I told my friend what happened.

The next day, I got a message from my friend saying “I’m turning it down. Let me know if there is another similar company with a better founder.”

Sounds dramatic, yeah? I think it’s more tragicomic. The guy lost a very-very big donation because of one simple thing – he failed to be awesome. And the funniest part of this story is that he has no clue what he’s lost.

Recently, one of my students messaged me:
“Coach, I don’t know what’s happening. Everybody cares about me, everybody is offering their help, I’m getting invited to different tournaments, while my friends, who’re stronger than me are not. Why?”

I just smiled…🙂
I’m sure, when you’re reading this article now, you know the answer. Yeah, because he’s one of the most awesome guys that I’ve ever met.

There are many definitions of the word “blessed.” But I absolutely believe that all kinds of doors open when you’re being awesome.

Give me a signature

When I was 15-years-old, I played in group “C” of the Aeroflot Open tournament. In group “A” were Grandmasters rated above 2,550. And one of them, playing on the top board was in the top 10 of the world (a very famous GM, whose name I’ll not reveal).

When my game was finished, I was walking around and admiring all the strong Grandmasters. At the corner of the playing hall, there was a group of kids, who were waiting for the end of that “top Grandmaster’s” game.

When he finished the game, he was approached by the kids who were desperate to take a photo with him or get an autograph. Yet, without saying anything to them, or putting on a fake smile, he ignored them and walked out.

No, he didn’t lose the game and wasn’t in a bad mood because of it. Maybe he had something on his mind, I don’t know, I don’t judge anyone… But the fact is, he was rarely being invited to top tournaments and ended up very far from the top 10 where he once was.

So does that mean that all the players who’re being invited to top tournaments have fantastic personalities? No 🙂

Some of them are just so strong, that they can’t be ignored. Some of them have a style that amateurs like to watch, and some are comparatively much lower-rated, but... they’re awesome! Organizers love them, their competitors love them and the whole chess world loves them. 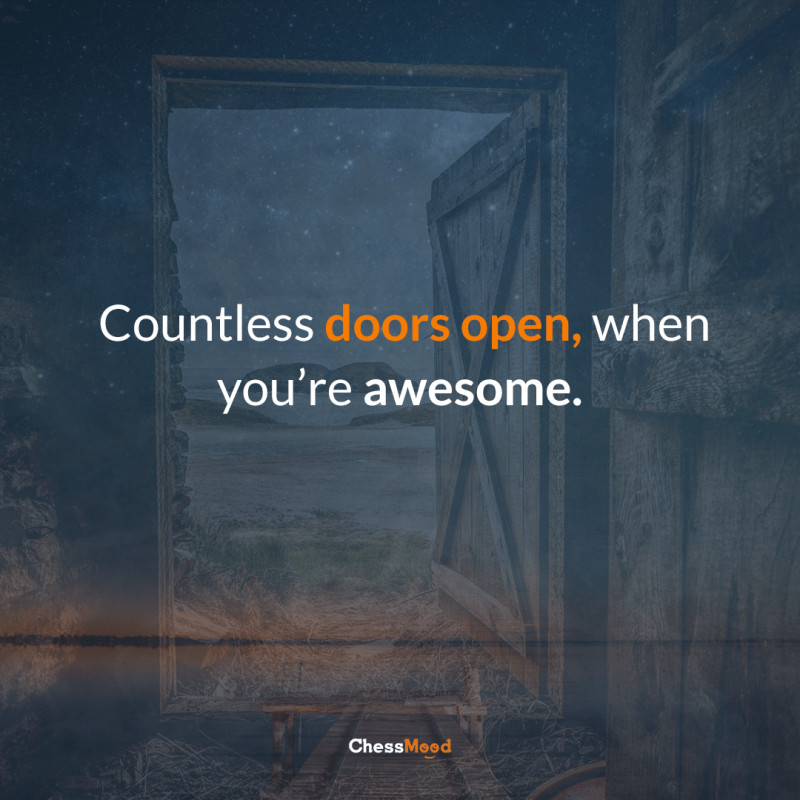 Whatever you learn, be it chess or any other pursuit, the best thing you can do is to learn from people who’ve already achieved what you want to.

But I notice many people come up with excuses as to why it’s not possible. They say it will be too expensive to have a Grandmaster coach, or too hard, or blah blah blah...

But the reality is very different.
If I told you that I don’t charge half of my private students, would you be surprised?

Among them are people who’ve helped me in the toughest periods for ChessMood, who have done something amazing or somehow touched my heart. If I were to charge for their lessons, I wouldn’t sleep at night. It’s not that I’m kind. Actually, it’s a selfish thing, what I’m doing. I’m pleasuring my heart. 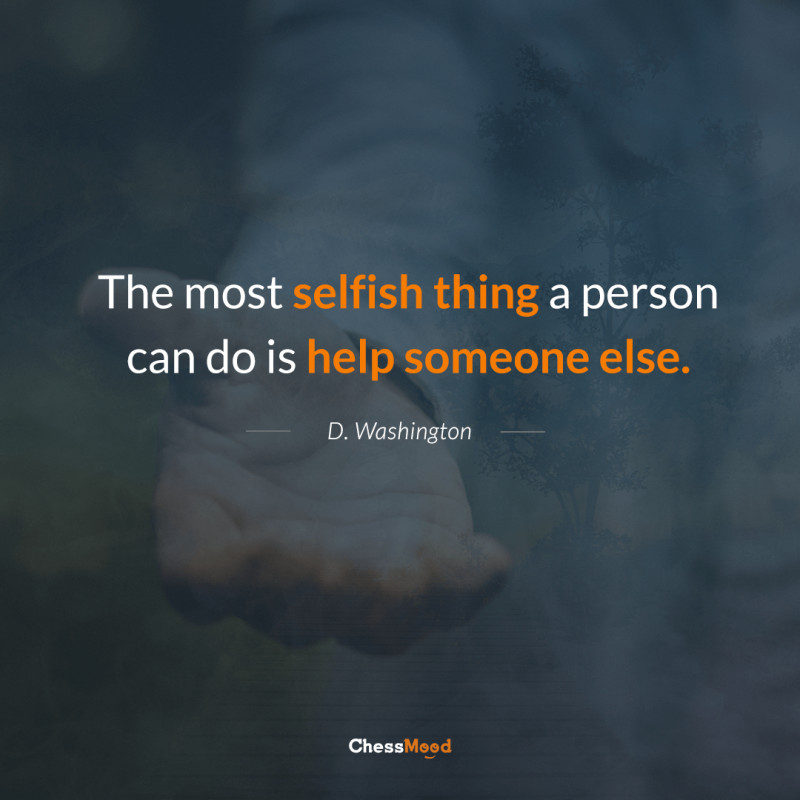 And it’s not that I’m different. I know many coaches, who help someone, not for money, but because their hearts want it.

Would you love to get advice from a Grandmaster about how to improve, what books to read, or even an analysis of one of your games? It’s much easier than you think.

Not at all 🙂 People hang out with people with similar energy levels. And it’s very easy to be nice and meet another nice person, who’s also a Grandmaster.

If you ask me who is the brightest person I’ve ever met during chess tournaments, I would say Bilal Samhouri, an amateur from Jordan. 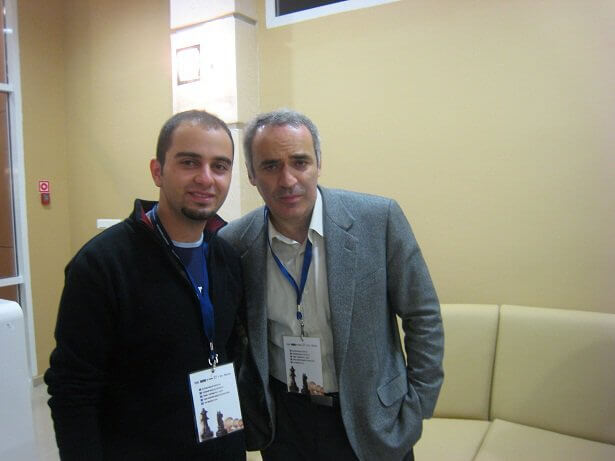 We became close friends and I would do everything to help him to become a GM if he wanted. But he had another dream… He moved to the USA, became a doctor, and works in one of the best hospitals there. 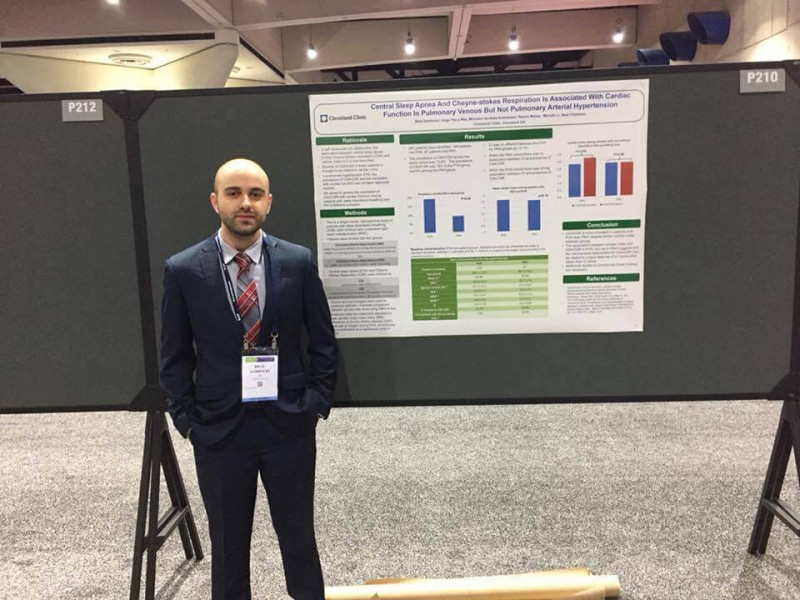 I haven’t seen everything with my eyes. But I bet the answer is simple. He’s so awesome that many doors opened to him.

Another easy way to get advice from a GM is simply to message them. But if you write “Hi, send me pdfs of your favorite books” or “Hi, coach me for free please”, it won’t work.

These GMs are very busy and receive many messages every day – they won’t have time to answer everyone. But by sending a message, you create a chance of receiving an answer.

And if you ask advice from 5 Grandmasters, you may end up with some very valuable advice. There is no correct message to send. But if you're an awesome person, your text will be awesome and more doors will be open.

In the future, I’ll share a few more stories of people who changed my life. Those stories started with simple messages...

How can you be awesome?

Some people were always awesome, some people became awesome. Either way, there are many books about personal development that can teach you how to have positive thoughts and rid yourself of the toxic things in your life. You can start from there. Myself, I have 2 general pieces of advice to get started. 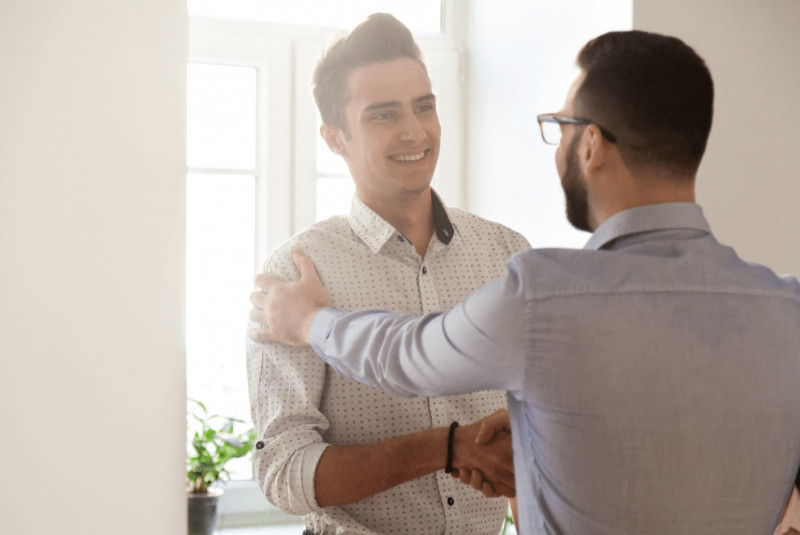 Appreciate whatever you have. Appreciate it when someone helps you or does something for you.

Learn to say thank you.
You’ve read a good book? Send a message to the author.
Watched a good course? Message the creator.
Did someone’s advice help you? Message them and say thank you, even if it’s a year after you acted on it. 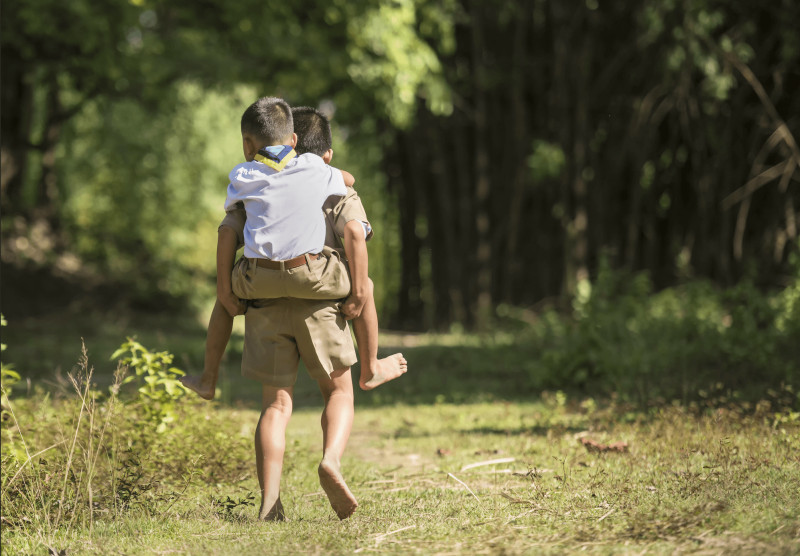 Make a habit of doing a minimum of one good thing for someone else, before you sleep. Anything for anyone. It could be working for someone, giving advice, or answering someone’s post on Facebook who is seeking help or a recommendation. It might be to teach someone to play chess. It might take 5 minutes or 1 hour. It doesn’t matter.

After you start practicing the art of gratefulness and helping others, you’ll notice how your energy changes, how your thoughts change, how you feel better, and how many awesome things start happening to you.

Message or call someone and say “thank you!”.
It can be your mom, and you can say “thank you” for something that happened years ago. After that, go and do something else for someone else.

You’ll be surprised how awesome it is to be awesome 🙂

P.S. Enjoyed this article? You can share your thoughts and awesome stories in our forum.