The bold-unbold technique: no more forgetting what you learn

Do you have challenges with memorizing what you’ve learned? You’ll love today’s article!

“That’s a brilliant technique! You should write an article on this, Avo.”,-  James Altucher, author of the bestseller “Skip the Line,” where he teaches different nice techniques for max speeding learning.

And here I am. Going to share with you the technique I invented, which helped me to deal with a big and ugly challenge that we all face.

We learn lots of new things. We feel good. But then we face it — the challenge. Its name is “I can’t remember.” 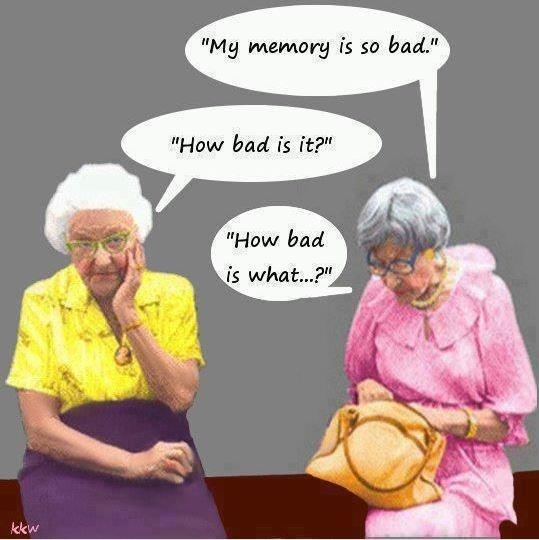 The previous day we learned so many things, but after some time, we actually only remember a small percentage of what we learned.

It goes in one ear and out the other 😁

And like almost everyone, I have also struggled with it for most of my life, no matter in studying chess or any other skill.

I would read a book. After 1 month, I could remember 1% of the great ideas I learned. Or “I thought I learned” would be more correct.

I would watch a course about something, and learn 100 new ideas!

“Yeah! I improved. I learned so much today”, I would tell myself before going to bed.

Is this a familiar feeling?
Most probably, you also have someone ugly like it in your life 😊

I struggled and hated that feeling.
Luckily, “most of my life” and not “all of my life.”

Until I took my phone and called my inside Genius - Avetikus.

But before I share with you Avetikus’ invented technique, let me tell you a painful story from my childhood 😊

The 1st time I retired from chess

I was about 8.
During a group chess lesson, we were offered a position to think about. When it was my turn to tell what I would play, my coach got very angry with me.

“Av, I have already explained this many times. When you have pieces vs a Queen, keep your King safe. And you offered to play g4 here?”

I couldn’t handle it anymore. I started to cry.
And with tears in my eyes and with a hesitant voice, I responded:

“You teach me 10 new things every time during the lessons. Then I go home and my father teaches me other 10 things.
Then I do my homework and learn another 10 things.

How can I remember all these? I can’t! And you know what? I don’t want this anymore… I hate chess.”

Remembering this story makes me laugh now.
But then I was very stressed…

And the worst part was that I never got a satisfying answer.
Not from my coach, not from my father, and not from my chess buddies.

How do I digest information when it’s too much for my little brain?

It was all very confusing.
Especially with my horrible memory. I could solve a puzzle, and then forget it the very next day. And then solve it again as if I’m seeing it the for first time 😁

It took many years to find a way - a solution.
It did not come during my professional chess career, but…

After retiring from professional chess in 2014, I switched to poker 😊
And in a few years, I became good enough to make my living with it.

I started to climb, playing higher and higher limits, and I thought I became  quite good at it. Until I hired a coach… 😁

It was eye-opening how arrogant and how weak I was. At the same time, I was excited when I saw how many things I didn’t know yet.

As I wanted to speed up my growth, I hired another 4 coaches!
Each of them was working with me on a specific area.

At the same time, each gave me lots of homework, courses to watch, and books to read.

Not surprisingly, soon I encountered the same challenge I had all my life.
In a day I would “learn” 50 new things. Yeah! But my happiness would last short.
The next day, I would forget 40 of them 😊

It was not only confusing and annoying, not only shameful when my coaches would fix my same mistakes 5 times, but also it was very costly.

In poker, you straight up pay for your every mistake.

I had to find a solution.

One day, I was lying in my jacuzzi (it had been my dream since I was about 18. That someday I would live alone, have a jacuzzi, and at the end of the day, would lay there and drink brandy 😁)
That day’s brandy was very good, and my brain started to work… and… Ta-daaa…!

An apple fell on my head.
Eureka!

I came up with an idea, which later did magic for me.

Soon, not only did I move to a bigger house with a bigger jacuzzi (I started to crush the game!), but I also elevated all the areas in my life where I wanted to improve.

I still use it. Every day. In every area I want to improve (I will show you some screenshots soon).

This is what I came up with.

Step 1:
I would write down on a word document (I didn’t know about Google Doc yet) detailed notes on whatever new things I had learned.
And I would bold them!

Step 2:
I would review my list before playing. So I could use my knowledge in practice and digest it.

Step 3:
After playing I would come back to my notes and…

I would unbold the things that I remembered and used during playing.
And I would leave the ones I forgot about bolded.

Usually, I would unbold only about 30% of them (My memory sucked and still does).

Step 4:
The next time, before playing, I would review only the ones that were bolded!
This limited review allowed me to focus on the things that I forgot the last time.

Step 5, repeat:
And then again, after the session, I would come back and unbold the ones that I remembered. 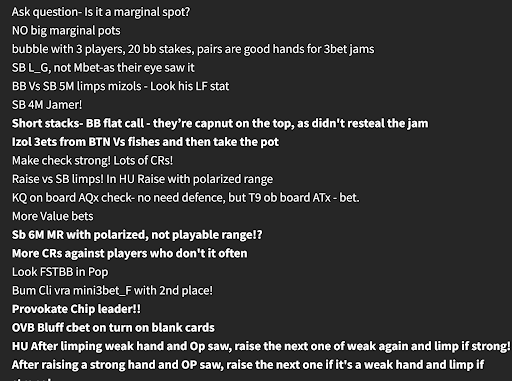 Screenshot from my Evernote doc

Just like that, until every new thing I learned was unbolded and in my unconscious competence.

Did I ever get to the point when all were unbolded?
Never! 😊 And that was good.

Because first of all, I was always learning new things. My list was becoming bigger and bigger. More bold notes were added. And that was good! I was growing.

Secondly, as the list was becoming bigger, I would sometimes forget some things that had been unbolded in the past… So I would bold them again (That meant it was not absolutely in my Unconscious competence).

And one more thing. Whenever I would laugh at any of my notes, because it was so obvious and simple to me, I would just delete them from my document.

How can you use this technique in chess?

Absolutely in the same way!

Step 1:
Open a Word document, Google doc. or something like that.

Write down the new concept(s) you learned.
Bold it.

Unbold concepts you used and could remember.
Leave the bold ones there.

Step 4:
Before starting the next session, review your new list.
Only the bold ones! Or pay special attention to the bold ones.

The bigger the list becomes, the better. Because that means you are learning more new things.
And the fewer bolds that are left means there are more concepts in your unconscious competence.

Should you have just 1 list? Or separate ones on different topics?

It depends on how much time you have for studying chess.
If you have just a few hours each week and you add a few things to your bold-unbold list, you can keep it all on one list.

If you study 5 hours a day, and you work at the same time on your openings, middlegame, endgame, you can have different lists for each of them.

You can have a separate list for each course you learn.

Here are some screenshots from one of my students' documents.
You can see he even separated the concepts into categories. 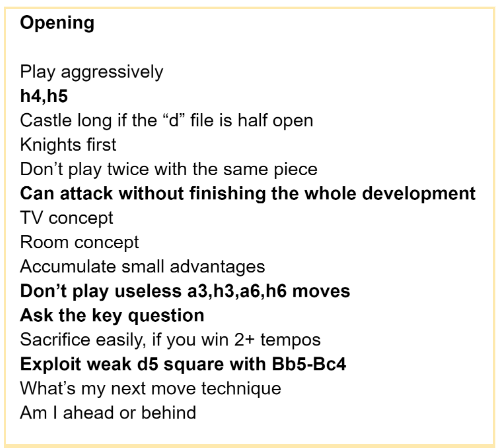 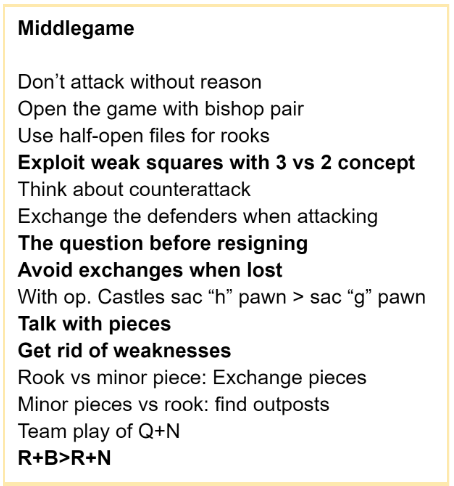 The bold-unbold technique with middlegame 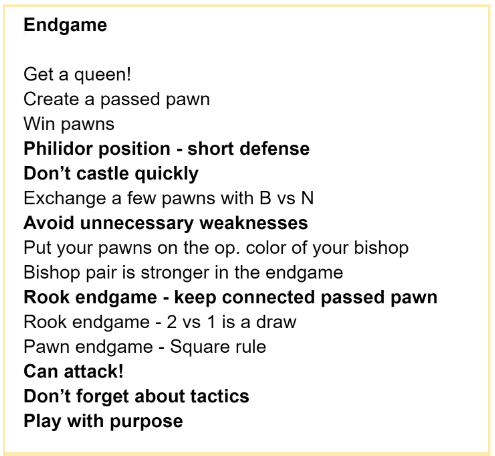 The bold-unbold technique with endgame

He also has separate lists for psychology and other stuff.
You can make yours any way you wish.

Often you can have screenshots and diagrams in your lists. When you look at it and it all becomes clear. It will often be easier than reading words.

Here are screenshots from my student's doc:

You will notice that the 1st one is unbolded. He easily remembers to take on c3 and ruin the pawn structure.

The 2nd one is still bolded. He often forgets to delay the castle.

The bold-unbold technique in other areas

I use this technique in all areas I want to improve.
And I have separate lists for each.

I also often create separate lists for books I read or courses I watch.
(If they’re very good and have lots of takeaways).

My document for personal development is already very big.

I recently started a document for writing. It is still small. 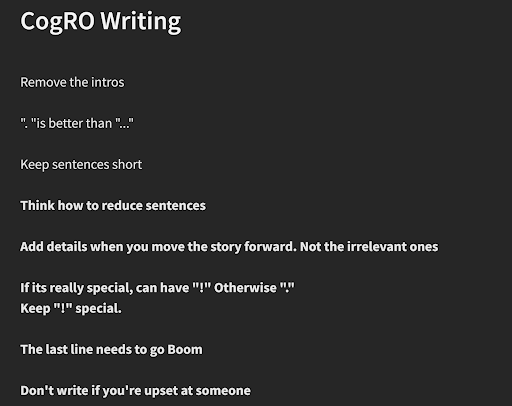 All my documents start with “CoGro” - Constant growth

But with time it’s gonna get bigger and bigger. And that’s good. It means I’ll learn. I mean REALLY learn lots of new stuff. Instead of the illusion of learning and forgetting the next day.

You watched a course? Take notes on what you’ve learned. Read a book - take notes. Learned something from a coach or while watching a stream? Take notes. And then keep bolding and unbolding before and after practicing.

The magic is waiting for you.
Especially if you combine this technique with "The 3-step formula and the secret sauce.”

For your growth,
GM Avetik

P. S. Feel free to share your thoughts on our forum.
And I would love to see your screenshots and give feedback on them.