Nobody likes to be in a bad chess period where you lose too many games. However, you can not only stop the bad results but also emerge as a stronger player by applying the 5 steps shared in this article. 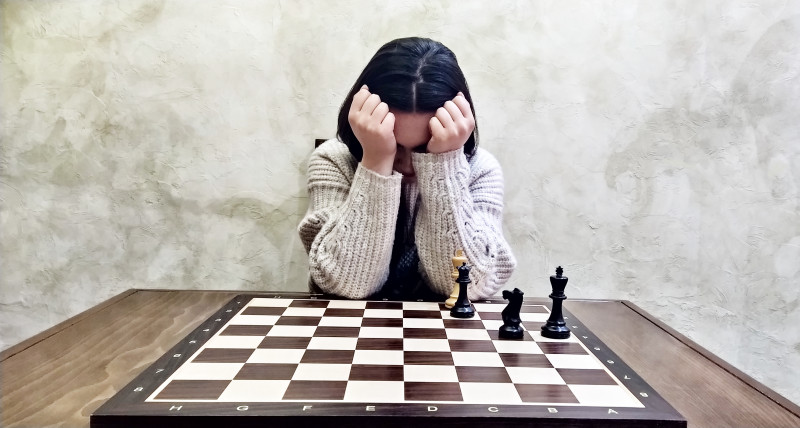 Every one of us has good and bad periods in our chess career.

There are times when we play very well. We are in a good mood. We think fast, see all the tactics, and win many games in a row.

And times when everything seems to be against us. We think slowly, tilt, miss simple tactics despite solving many puzzles every day, and as a result, we lose lots of rating points. Such periods are called the “black period” or “crisis”.

What to do then? How to handle such periods?

In this article, I’ll provide you with 5 crucial steps to overcome them very fast. Let’s go.

The 1st important step is:

It’s very important to be aware of the following three things:

To acknowledge the crisis and feel that something goes wrong instead of closing the problem's eyes and ignoring it.

You and I are not the only ones who may have and will probably have such bad periods. And if we can handle it better than others, we will have a big advantage over the competition!

When we play badly, we lose our mood, our confidence, and as a result, we start to play worse. But, when we play worse, we lose even more confidence, our mood becomes even worse and so on. This is called the snowball effect.

What is the 2nd important step? I think you can guess it.

It can be a day, a week, or a few weeks, just up to you. It’s very important to stop the snowball and take a step to the 3rd part, which is:

A crisis is an amazing opportunity for us. It indicates that it’s time to analyze our games and see the reason for our defeats.
You will be surprised when you do this, as the hidden reason will often be very different from what you were initially thinking.

Recently, one of my students had a bad period and lost around 100 points playing online chess. He immediately stopped playing, stopped the snowball, and asked me to check his games. He thought that he blundered a lot and that was the core reason for the bad results. But when we analyzed his games, we found a totally different reason. He was messing up all the lines, forgetting all his analyses. In many games, instead of making a winning move, which he had in his analyses, he made a bad move and then lost the game.

What was the solution?

He just stopped playing chess 1 weak. He revised his lines, variations, and analyses, opening by opening. The result?

He brought back that 100 points and raised extra 50 points. The crisis in his game was the indicator yelling, “Go and revise your analyses.”

Such examples are a lot. So I’ll bring another two.

One of my students used to think that the bad play was because of his bad preparation for the opening, but the real reason was that he didn’t make the right practical decisions.

When I became a Grandmaster, the following year, I didn’t increase any rating points despite my hard work. So I analyzed my games very carefully and found out that I was making horrible mistakes in calculation and sharp positions. For the next 6 months, I started to work on them very hard with the help of my coach GM Akopian Vladimir, and it didn’t take me a long time to jump from 2500 to 2600.

My advice: Ask someone to check your games. It can be your coach, mentor, or friend, but someone who plays better than you or has more experience than you. He may notice something that you couldn’t see.

We should stop the snowball as fast as possible, so don’t be shy to ask someone for help.
In his excellent book “How Life Imitates Chess”, Kasparov wrote: 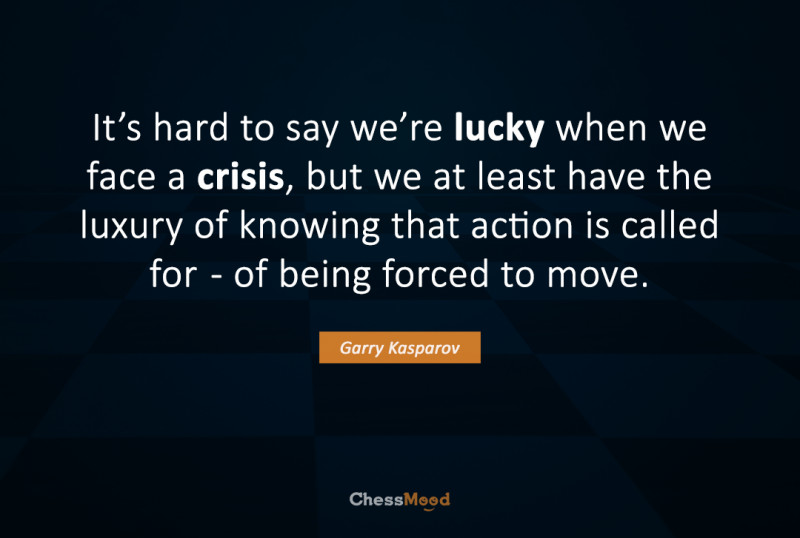 The Chinese word for “crisis” is composed of not one character but two! 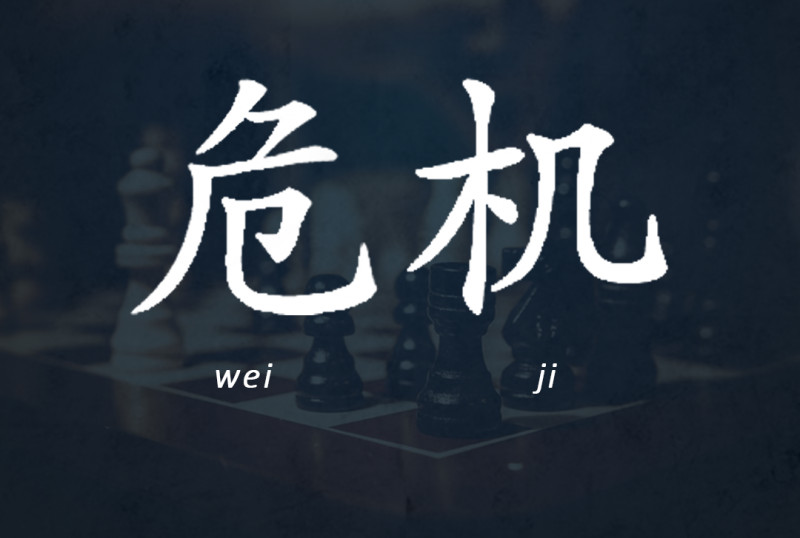 The 1st one, “wei” means danger, and the second one, “ji” means opportunity!

Danger – because of the snowball effect about which we have already spoken.

Opportunity – because the crisis itself is a super chance for us to understand that something goes wrong, find the core issue, fix it and step up to the next level. 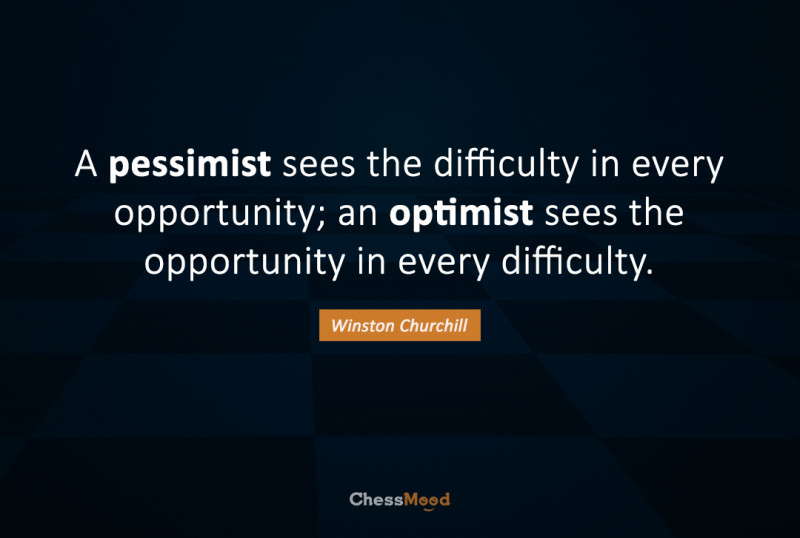 And here is another fantastic quote from Tony Robbins: 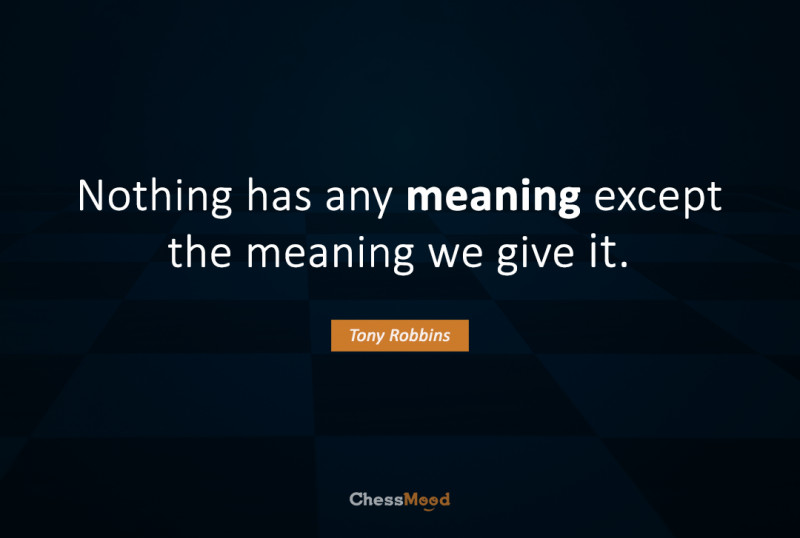 It’s up to us to decide whether to let that snowball effect take us down or find the opportunity in that crisis period.

And the last step is

When that bad period comes, don’t say it’s a bad period or crisis. Instead, use the word “challenge”.

As we already spoke, these periods will happen to everyone, and if we handle them better than others, we’ll have a big advantage over the competition. So treat them as a challenge: Can you handle them better than others? Can you stop that bad period fast? Can you find the opportunity? You’ll be amazed how better you’ll handle such periods with just changing a simple word in your vocabulary.

The last good news: everything we have spoken in this article is also applicable for life!
We all have good and bad periods, and all these steps you can apply in life as well. Just be aware that this happens with everyone, and it, unfortunately, has a snowball effect.

We should stop it as fast as possible, find an opportunity, and treat it as a challenge instead of treating it as a bad period.

You can download the image below, which I made for you, so you can quickly remind yourself of all these essential steps whenever that period comes. 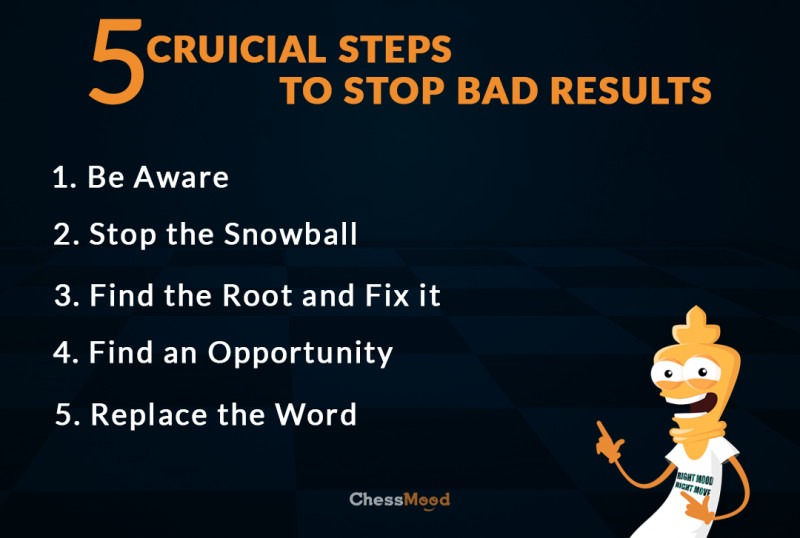 Good luck my friend. I would love to hear your feedback and inspiring stories about how you remained a real warrior in the “challenge period”, found an opportunity, and took your chess or life to another level. Feel free to PM me or write in our forum.