We have this topic in our Blog.https://chessmood.com/blog/the-journey-into-the-scandinavian-defense-jungleIf you have any questions, comments or you just liked it, feel free to share your thoughts here. 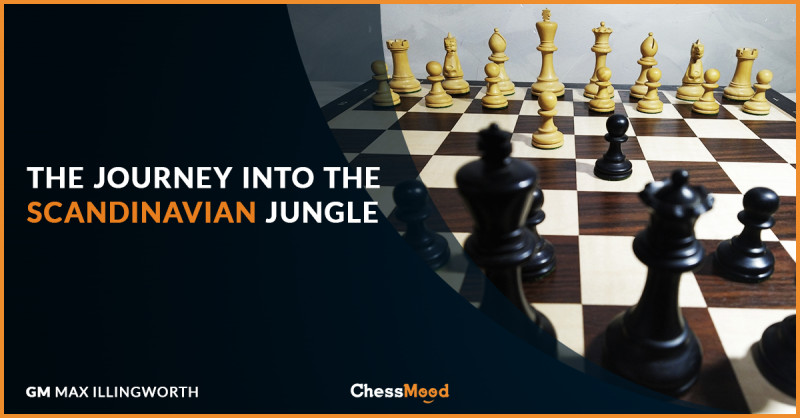 I liked the article, do not get me wrong, but I wanted to add a little bit more of research establishing the origins of this line. That is why since I knew the history, I am going to share it here with you to complement the article.

I used to play the Scandinavian too, and at one point I relied to Tiviakov's Chessbase Fritztrainer, a must have if you play this line since it is authored by Tiviakov's himself, even if it is old and new theory comes up all the time.

In the first introductory video, he explains why he started to play this line. The first time that he encountered this line was in the game Tiviakov Almeida, played in Catalonia, at the International Open of Solsonés in the year 2005.

I am including two games here in this post for your information. The first one, is the game played with the Qd6 line, were Tiviakov is surprised and decides to play this line after this encounter.

The second game is the game against the rival that GM Max Illingworth mentions in the article, which was played a year before, also in Catalonia but with the Qa5 line, for the sake of exactitude.

I also checked the book Secret of Opening Surprises 6 where in the page 123 Tiviakov writes about his game with Almeida. He literally says:

“Everything started in August 2005. I was playing in an open tournament in Solsona (Spain). I was White against Cuban player Omar Almeida, and after a mere 11 moves I was lost. Luckily for me, my draw offer on move 12 was accepted by my opponent.”

After the game he writes in the book regarding this experience:

“Well, this was a very useful experience for me. I thought, if I can get a lost position with white so quickly (and I have to admit that I had even studied this variation before as White) then why could the same thing not happen to other strong players?! So I decided to work on this line to incorporate the Scandinavian Defence into my repertoire.”

And this is it, I just wanted to point out this, since I knew this story and I thought it was important to have it right. No hard feelings towards the author, do not get me wrong!

Best regards and good luck with the Scandinavian adventures, maybe I will pick it up some day again, the sales video is very good and made me wanting to play it again, but at the moment, sorry… I am devoted to play what Avetik sensei tells me to… ;-)

i even heard one of his blogs he mentioned he studies rossilomo from chess mood which help him to break 2900 in chess.com
3 REPLY

That's interesting Arnav, maybe he is one of Avetik's pupils too... ;-)

I liked the article very much. I am not a Scandinavian defence player, using it only in blitz and bullet games, and that's why I found this variation very interesting. After 1. e4 d5  2. exd5 Qxd5  3. Nc3 I knew Qd6 move from Carlsen's games but a6 move took me aback.
1 REPLY

A very interesting article indeed, and a nice advertisement for the Scandinavian Defence. To be clear though I think the Scandi is best suited for Rapid & Blitz, admittedly there was a time where you could catch out a lot of players with this defence but since then it has gotten a lot of theoretical attention and the Scandi Boat has sprung a few leaks in a number of places. Don't get me wrong it's not refuted by any means, but in all main-lines Black is under strong pressure, be it the traditional main-line 3...Qa5; Tiviakov's 3...Qd6 or Bartholomew's 3...Qd8 (The most underrated, and most reliable of the bunch I think). I should also note that Duda and Naka have used the Scandi quite successfully in Rapid Chess, incorporating a double fianchetto setup but White players clearly have not been studying there 'Classical Games' :-) as Bobby Fischer in his game against Karl Robatsch (1962) already provided the Blueprint for the ideal setup that white should be aiming for here. Perhaps this Fischer vs Robatsch encounter could be Game 93 in Commented Classical Games :D, and I would be remiss if I didn't add that this beautiful game featured in Bobby Fischer's - My 60 Memorable Games.

I would be curious to know if GM Max Illingworth has really discovered The Strongest Scandinavian or is this just more old wine in a new bottle.

Sorry for another long post Avetik, I did my best to keep it on point :)

Sounds like the Scandinavian is in a similar situation as the Benko, which is also under strong pressure in multiple lines. The recent ChessBase DVD on the Benko gave me some new hope, but it concludes with "Houston we have a problem, but hopefully a solution will be found" in these lines.
3
We use cookies to provide you personalized recommendations. By using chessmood.com you agree to our Terms of Service and Cookie Policy.
Ok, Thanks.