We have this topic in our Blog.
https://chessmood.com/blog/mistakes-are-not-failure
If you have any questions, comments or you just liked it, feel free to share your thoughts here. 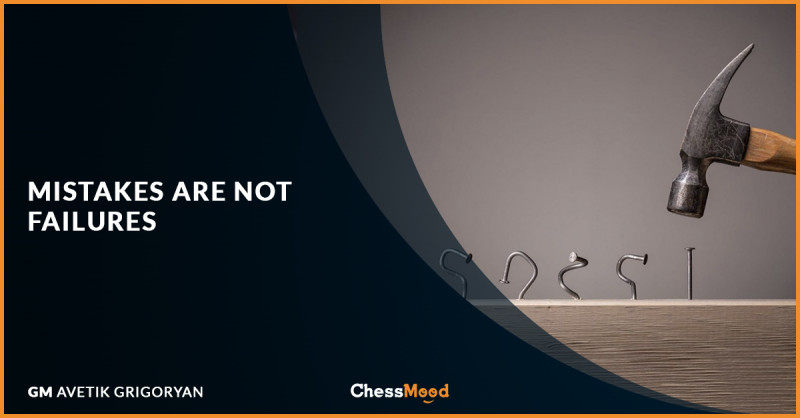 Excellent article/blog. There is a long debated question as to whether "kids be taught how to fail".Growth mindset encourages to let failure happen as then the process of learning starts.
REPLY

Excellent article . As rightly pointed out , fear of mistakes forces one to be stagnant - not willing to try new things . That forces us to remain in our comfort zone and makes us think that anything out of it will invite mistakes . We feel that Mistakes are the worst thing that can happen to us and that we should  do everything possible to avoid it.

My problem is closely related to the one discussed - fear of failure. I deal with my mistakes objectively , trying to learn from them. But the thought that my image before others will be shattered (if I lose to my opponent ) is one reason contributing to it. There are many who have the same problem. I have noticed a phenomenon in my place - players who start coaching stop playing tournaments . I am not speaking of busy coaches who do not have time . I strongly believe that they cannot think of the students coming across their defeats in games - fear of failure again  !  I would like you to have an article on it. I think only if the perspective on what one should expect from playing a game should change .

Thank you for the excellent articles.

Extremely Sorry . I just read your excellent article the Right Mindset. That deals with the fear of failure part !

I don't know my chess style and my likings are variable. I admire Carlsen. But my play cannot be determined. I have won a 25 move game and next I round I won a long complicated positional struggle. Previously I was a good endgame player, my style was to attack the pawns and exchange pieces. But after studying the book 'Attack with Mikhail Tal' I developed a good feeling of an attack but my endgame skills are nearly vanished. Can anyone tell me how to deal this?
REPLY

I read in a book once to reframe failure as results you didn't want. My own take is if those 'results' help you go on and achieve, then perhaps they were results you needed but weren't looking for.

There are plenty of motivational books that will recount Edison's light bulb, Colonel Sanders attempt to sell his chicken recipe, and so on, who succeeded by keeping on going despite many failures and probably discouragement for those around.

Other similar advice is be prepared to fail, but fail fast and adapt (that is once you've identified something isn't working and learned from it, try something slightly different and see how that affects things - giving up and doing something different puts you back at square one again). Trying the same thing harder and doubling the effort when effort wasn't the problem is like the fly trying to get through the window.

The investor or gambler's advice about not putting in more than you can lose (that is having reserves to fight another day, rather than an all-in, moonshot, home run attempt) and the mindset opportunities will present themselves again another time.

Playing the long-game rather than a short term view of that one mistake.