Main Channel
How to get 2000 Rating
Hey Champions!
What do you think, what skills every chess player needs to have to get 2000 Level?

i am 1966 and I think good opening preparation and good tactics is important. analysing classical game should not be missed . this is what I think waiting for suggestions
3 REPLY

I remember when I was young (20) in 1977, (two years in chess around 1800) A friend (2100) told me " study these books, and you will be 2000". I have studied these 2 books by Alexander Kotov and Alexander Koblents : in french "l'école des échecs" meaning the school of chess. It's all about combinations. there are lessons and exercises...You have just to do what the authors ask for ! But Warning ! it's not an easy task, sometimes they ask you to solve a problem blindly... At the end of one year studying (I had also a work), I was 2050.
2 REPLY

could you please tell the two book names in english? so that chess lovers all over the world can utilize your advice. i am from india. whether the english version of the books are available?

i think the Kotov's  book is "THE SOVIET SCHOOL OF CHESS" which is the other one?

Hello, As i'm french, I study these books in french, so I don't know if they exist in english... But I will make some researches. In fact Kotov's "Soviet school of chess" isn't one of these books, it is written with Yudovich, and it's totally other thing. I will come back to you with some good news I hope. 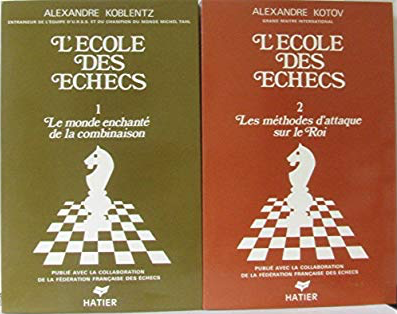 In english language, Kotov's book is ChessTactics. Sadly, Koblents'book doesn't exist... It exists in french, german, spanish but not in english ! You can replace it by Fundamental Chess Tactics by Antonio Gude, it's the same philosophy. But remember you do find exercices without touching the pieces like a classical game. You write your solution on a paper, and if it's not as on the book, you don't have found it... Be demanding with yourself, it's the secret ! So 1) Gude and 2) Kotov. Good luck !

I am just 1465 but I have my own suggestions correct me if I write something wrong.

First of all I think tactics are very important in order to visualise positions well. I prefer these books.

2. The complete chess workout by Richard Palisher. After you understand the basics of all tactical pattern you can now move to the next level of solving some more difficult puzzles. So this book will help you.

The method which i use in solving puzzles is notbook method and recently I found that it's also written in Woodpeeker method. I use notebook to write all the moves and variations of all the puzzles which i solved and with time. For example I solved one book in 40 hours then I took break from that book and then I try to solve it again after few months and then i apply the same idea. This time I am sure your time of solving same puzzles will reduce too and also your pattern recognition will improve too.

I frankly never studied any book on positional chess. I only did studied the chapter one from this book. It''s useful in case of pawn structures.

In Chess Structures: A Grandmaster Guide he presents 140 examples, including full games and fragments, classified by pawn structure in an attempt to guide the reader to learning how these specific positions should be conducted.

My 60 memorable games is also one of my fav. book.

I know GM sir recommended the Devoretsky's Endgame Manual. Which is best in case of endgame manual  but I also like Silman's endgame manual and he teaches basics of endgames in cool and simple way and it will be easier for a player of below 1500 to understand his points.

I frankly do not like to memorize opening variations. My point is very simple is case of opening play. Choose attacking lines against positional players and choose positional lines against attacking players. For example we all knows that players who play sicilians love to attack. So according to my point choose positional lines against c5 so I love to play alapin. I have 5 dvds on alapin which covers all the lines with nice ideas. So i always turns Sicilian players into positional play. I know some may argue that alapin is so drawish but if you do not know anything by heart then do not make such conclusions. Alapin is yeah drawish if black is also well prepared but if your opponent do not know key moves and key positions he will fall into dangerous positional attacks and will lose the game in the early stage. For more information try to look online the games of evgeny svechnikov in order to see the power of Alapin.

How to prepare openings:

I think if you want to prepare any openings then there are few points you have to consider which I am writing in the bottom.

Every openings have some key squares which you must have to know in order to play the middle game well. So try to understand them. For example in case of advance french we alll know that d4 square in so important for white to defend and if he wont be able to defend it he will mostly lose. Another example is about the e5 square in Caro kann exchange. E5 square control is key for white in caro kann  exchange lines. Sometimes white place his pawn on e5 then he hopes for attack in kingside and on the other hand black hopes for counter play in the queen side by minority attack.

You also have to know some middle game key positions which often arise in your opening so it will save your time in tournament play and you will be able to make plans faster too.

I think I studied in past some ruy lopez positions in which I saw that sometimes wrong trades lead to defect in endgames. So I think it's useful for us to know which kind of trades favour us in endgame and which are bad.

I think it's most important factor which we have to apply by heart. It's useful to study 20 mins and day instead of 6 hr on weekend. So improve your consistency too. For me my dedication level is extreme. I love to study chess even though mostly I fail but fail itself says 'first attempt in learning' . So never feel down even if you fail in something. Keep the above quote of fail in mind and improve your dedication power.

Correct me if my thinking about improvement is wrong and sorry for my English.