Get unlimited access to all our training for $29/mo

Hi, today I played a nice game of Carlsbad. I know it was blitz but I was well prepared for the main lines so I had no issue with time control. My question is how do you play as black in Carlsbad? In my game black made a commitment by playing c6. I think it gave me additional option of long castles. Instead of this c6 I prefer more Nbd7- Qc2- Re8 idea to play Nf8 and later decide play c6 or direct c5.

The problems of c6 was that black will have to lose a tempo in playing c5 and this tempo is sufficient for white to advance his forces in the queenside. Also if black follow general plan of Nbd7 then Re8 Nf8 and white thinks ok let's castles long (which he can if he wants to) then black have additional idea of Be6 Rc8 and direct c5 and hope for active counterplay against white's king.

Some thoughts about my game now:

1. I know many masters still commit c6 and later white can castle and black will lose a tempo by playing c6 then c5. So I disliked it because black can wait first to see where white king will castle then move the pawn in the queenside.
2. Move 9th h6? My first instinct was like really? My king is still in center man and I can castles long anytime so are you happy to allow g4 g5 so easily with this g7-h6 pawn str. Thanks to @jay for his amazing lesson about lever so I had my idea in my mind.
3.  On move 11th see he played c5 and he was the one who lost a tempo not me.
4. On move 12th if he can take on d4 then I am still better due to excellent control of the center and d file and still my attack is on the way.
5. On move 14th may be Kb1 was not essential but in some lines may be it is. I know its a rule to place king there to defend a2 so I chose Kb1 instead of aggressive g4!
6. On move 14th Nb6 I thought it will be almost impossible for him to survive my attack so I went for 15th g4.
7. On move 16th when g5 lands on board I thought I am winning
8. On move 20th I saw both Be5 and Bg6 But I liked winning an exchange hehehe. My friend told me Bg6 wins and I said yeah both Be5 and Bxg6 looks winning.
I am happy to hear your opinions about this game. I know it was blitz but I think my ideas were decent but if my ideas have any issue or if I misread about any plans then kindly let me know. Carlsbad is so so complex sometimes so it's not so easy to remember all the words of mentors and sometimes it's hard to remember little deep details so experts of Carlsbad are welcome to help me.
Note: Keep that in mind I am just a normal 2000 elo chess.com and 2150 on lichess player.
Point: Many of you may think why I did not appreciate myself alot. It's my strategy. I don't wanna look like a egocentric person or something like that. I like down to earth attitude and it's gonna be key of my success.

playing c6 is more precise. As black you do not want to castle too early, but if you do not go for c6 you do not have enough wating moves

hmm, ok but what about c6 castles and then black will lose a tempo in the line Be6 Rc8 and then c5 or you wanna choose the plan of b5 against that which is gonna be super complex middlegame battle?

So may be you like to do plans such as Nd7 Nf8 Ne6 g6 Ng7 Bf5 kind of thing to trade LSB first then play castles right? I also studied those lines in past. I think trading in this manner is slight better for white because black wasted a lot tempos in this maneuver.

Explain more so I can learn more. Thanks for joining this debate. I will learn a lot from modern theory.

now I am so interested to know your opinions about the games I shared in the bottom!

Take a look at this game and you will see the problem with early commitment with c6. Yes, I am not saying your idea is wrong but I wanna know more. Because whenever I play these lines and black commit early c6 then I like this long castle idea and only b5 plan can be super complex for white to handle but even there white can use the c5 outpost for his knight. So, it's gonna be interesting to know more about this structure.

Now take a look at the game played between Timman and Boris Spassky. Here black delayed c6 because he was waiting for white to show his cards and when white castled then he went for c6 and his plans. On the other hand if white castles long then black can get nice counterplay with Be6 Rc8 and c5

genereally casteling long with Nf3 isn´t super dangerous for black.b5 and black is usually at least equal. I would really reccommend sam collins video series on pawn structures, where he explains in somewhat like 8 hours the carlsbad for example with tons of classical examples.

I am studying Carlsbad from there. I posted here because I don't know what are new updates n this pawn formations. He said the early commitment is not good for black. I don't remember he said this or not. Kindly explain to me why with Nf3 0-0-0 is not super dangerous? After b5 I feel like white can play both positional and aggressive.

@Abhi_yadav  Also black can play strategically and agressively.There is a equal game with counter chances.I played with black against this setup before and I never lost a match.It is not dangereous If your opponent play well.

Yes, level of player is not so high but another victim of early commitment with c6

Your opponent lost because of his/her mistake.Not from opening

True, but the point of this game post is to show you why early commitment with c6 gives white extra option of castles long and then he can play in both positional or attacking way. Rest you can check above

T K sure can you share some of your games which you commented in this pawn formation.

@Abhi_yadav My games was OTB and I lost notations.So I can't.I didn't share any new game because I switched to benko.Also I can only find my old matches(Very bad matches).But If  I can find any games of mine I will share it.

sure, I prefer not to leave your old lines for forever. Yes chessmood openings are best but coach never said to leave the old repo. I am doing a lot KID pawn formation training games and carlsbad training games and they are going fine for me.  Another point is that if you stop playing your old lines then you will sooner or later forget the ideas and it will take more time to revise them.

Guys where are you????
REPLY

OK but I can't play today.I will be offer a match tomorrow to you.OK?

T Ksure but if possible add me on hangouts or skype or discord. If possible so we will be connected

Sorry It is not possible.But we can chat after game at analysis board and we can discuss our mistakes.
1

No one posted any update?

Arkell's Endings (book or video form) has a fair bit of discussion on the minority attack.

I am thinking about improving my carlsbad knowledge to next level. I already studied a lot ideas. Carlsbad is not about minority. It's a broad subject. So here I started this debate.

Here as we can see white castled long and black haven't made the move c6 so now the plan of Be6-Rc8- c5 is more effective. I was right that early commitment with c6 is not so good. Do you guys agree ? 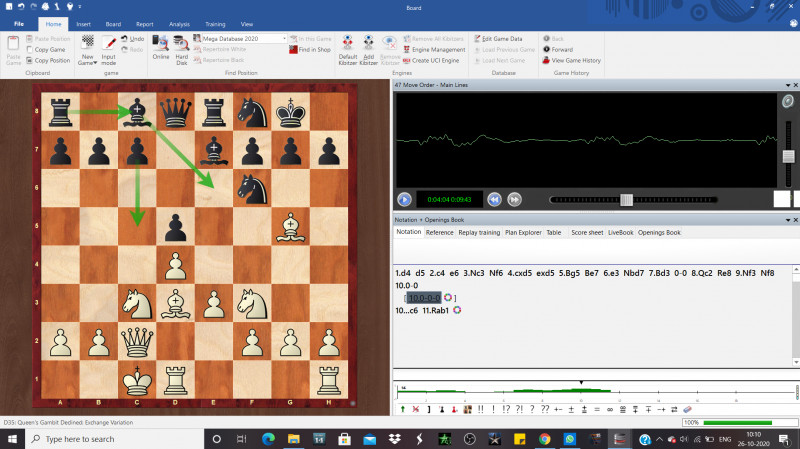